So here I am live blogging form somewhere in Lenape territory, although most of you would think of it as the southern part of Central Park.  I'm here for the People's Climate March which will kick off full scale in about an hour.  I travelled down to New York with Jonathan Schwartz of Interlock Media and his photorgrapher intern Caitlin McManus.  We dropped my car at a friends of Jonathan's house in Larchmont and took the train into Grand Central.  Travelling with Jonathan usually involves drama and contingency, but I will spare you that. We met up with my son William at a roof party for Brown alumni that Jonathan got us into. 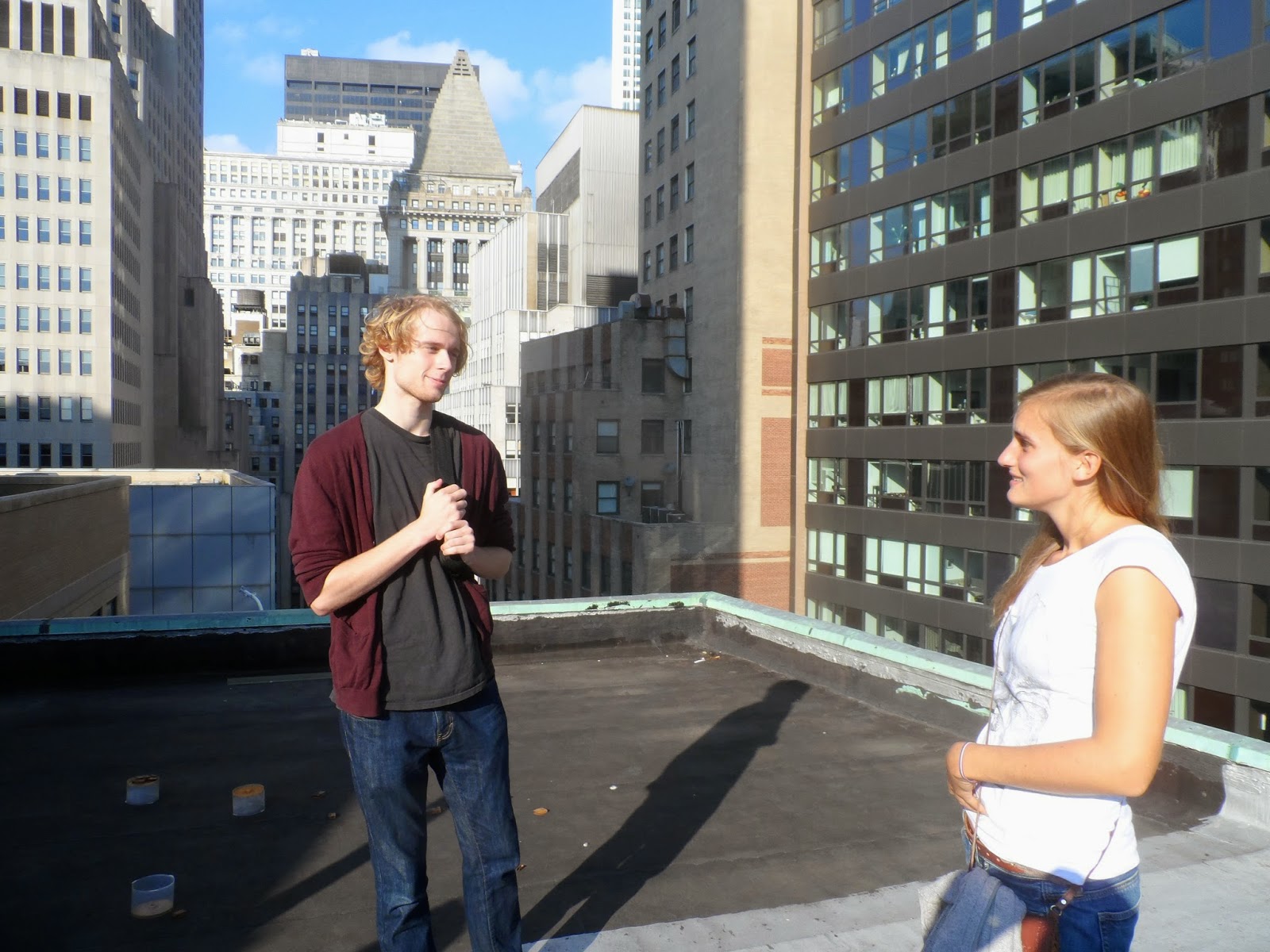 William noted that the party seemed to consist of old white people.  So I should get a lot of credit for getting him and Caitlin there 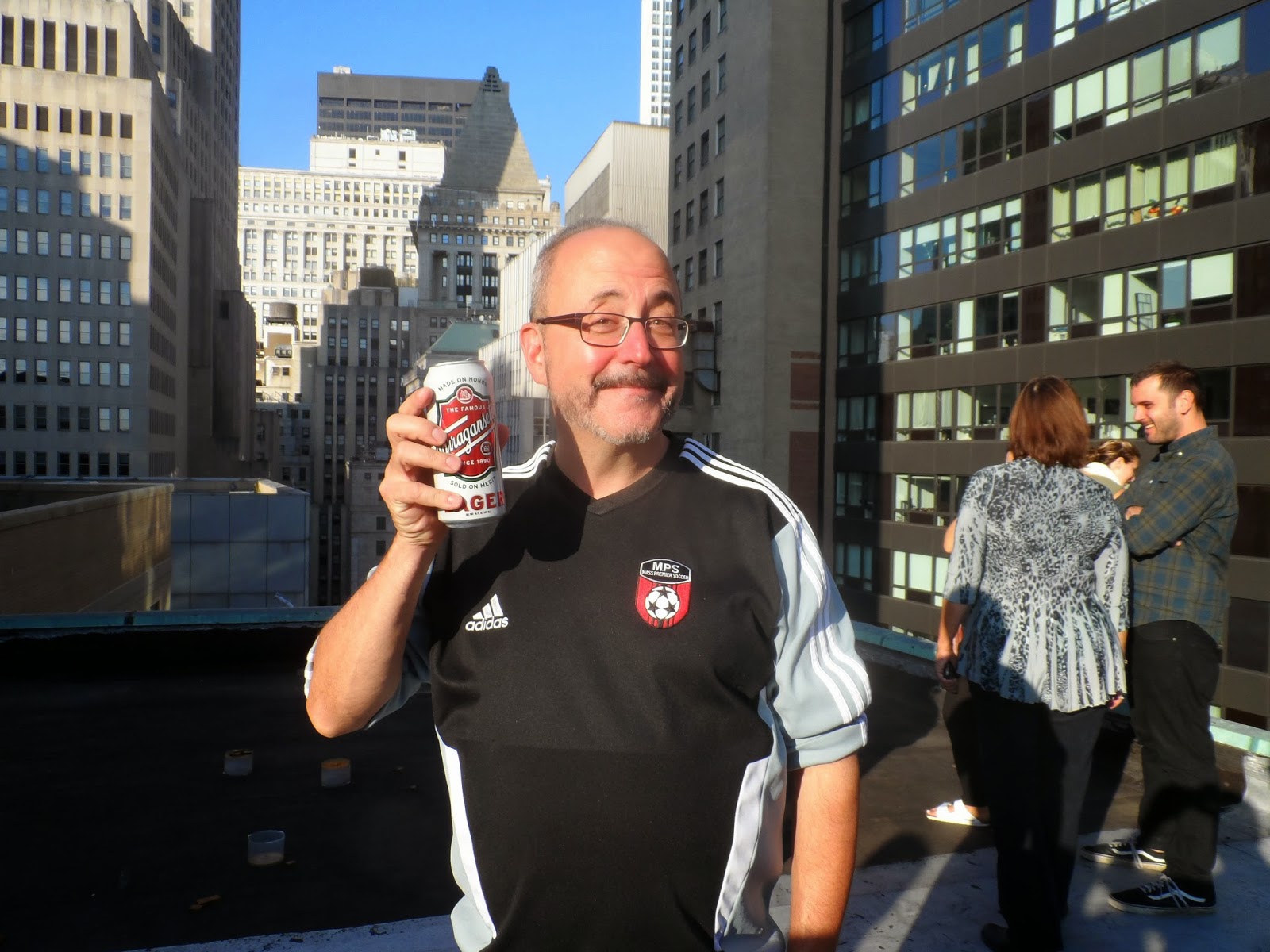 I was amazed to learn that Narrangasset Beer has become trendy in New York.  The next new thing for hipsters after Pabst Blue Ribbon 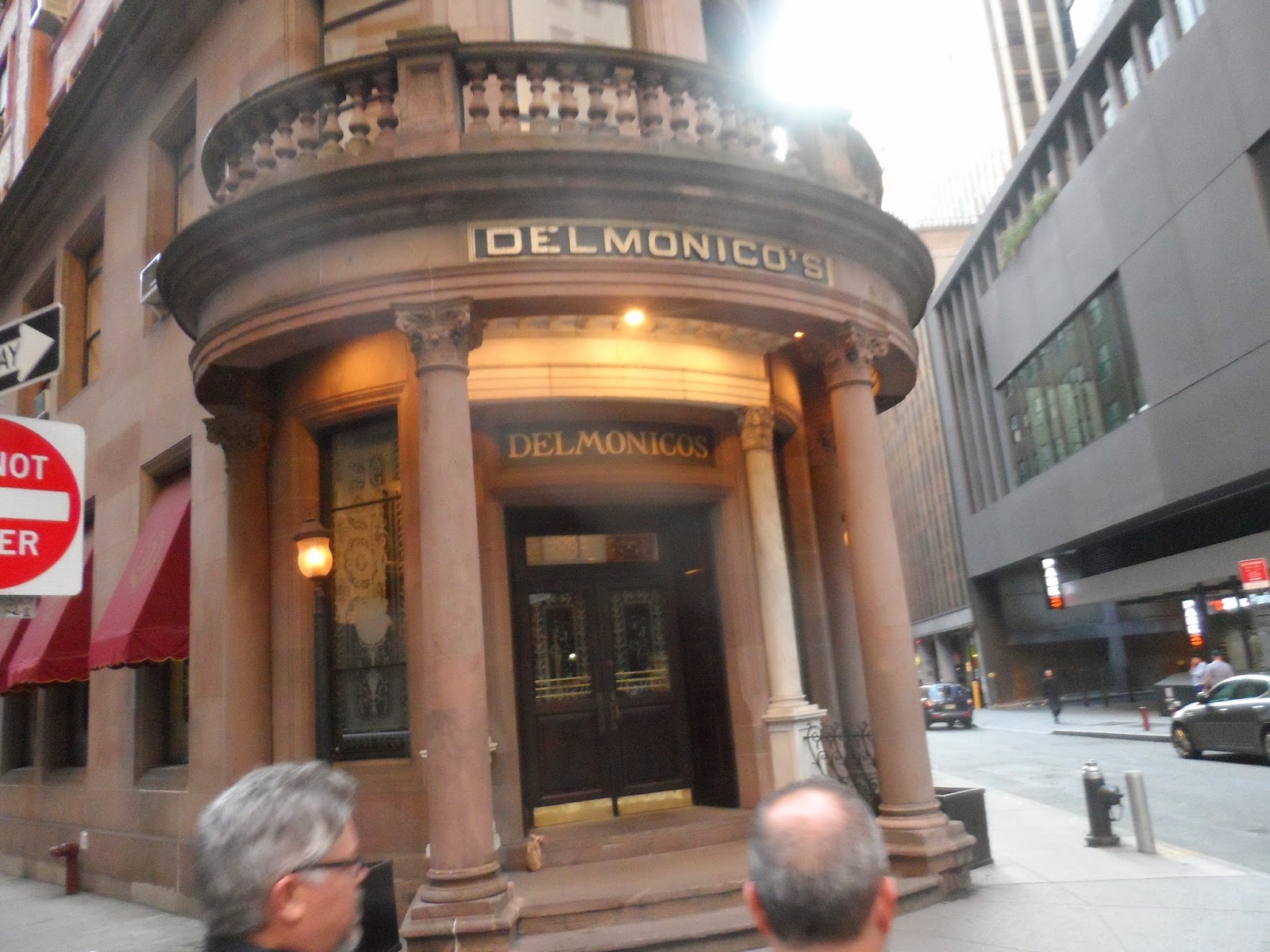 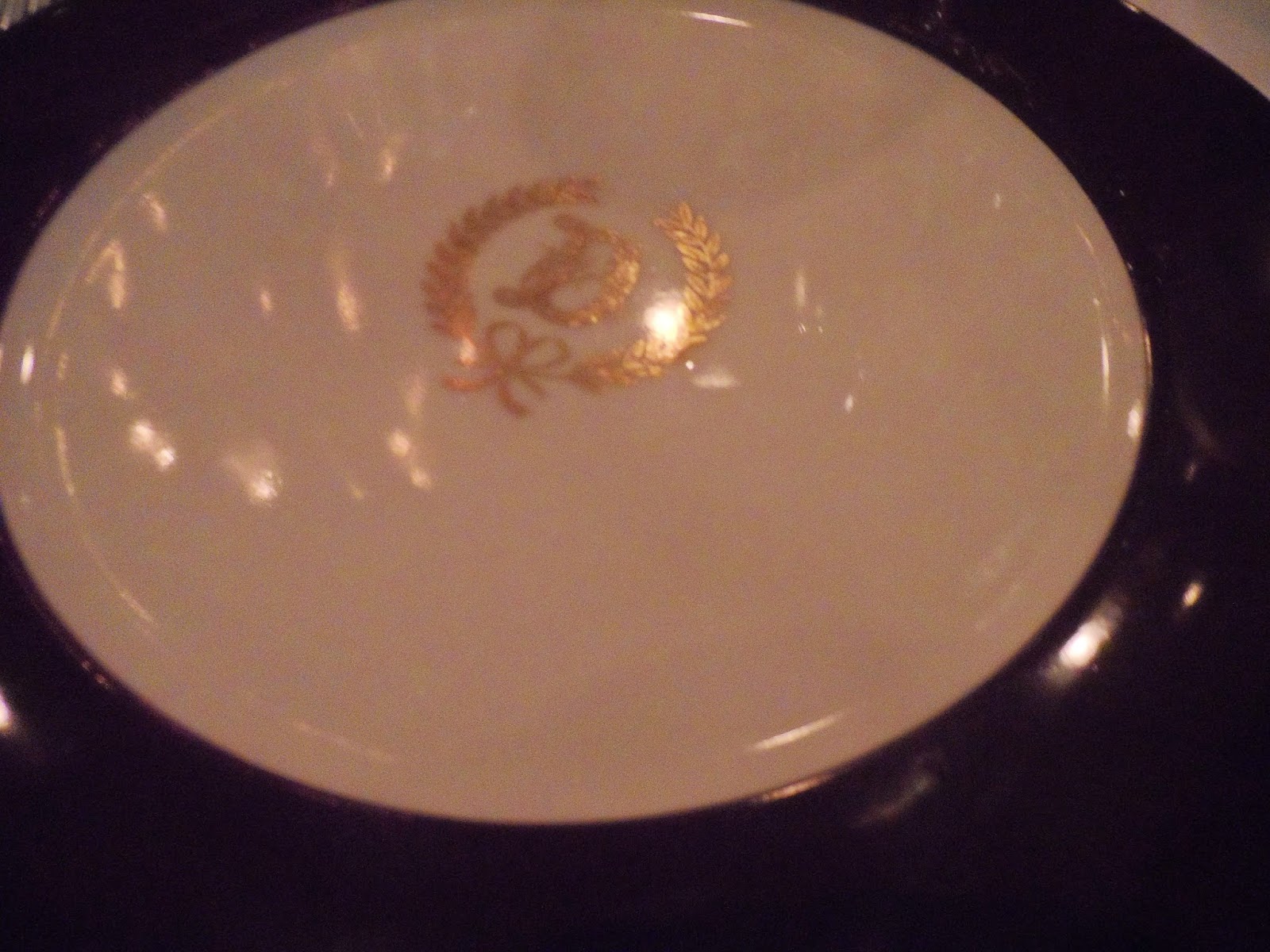 We ate at DelMonico's more or less on  whim.  William really like the steak that is coming out of his inheritance.  At the roof party Jonathan introduced me to someone from the Union of Concerned Scientists who will be putting me in touch with someone on carbon tax. 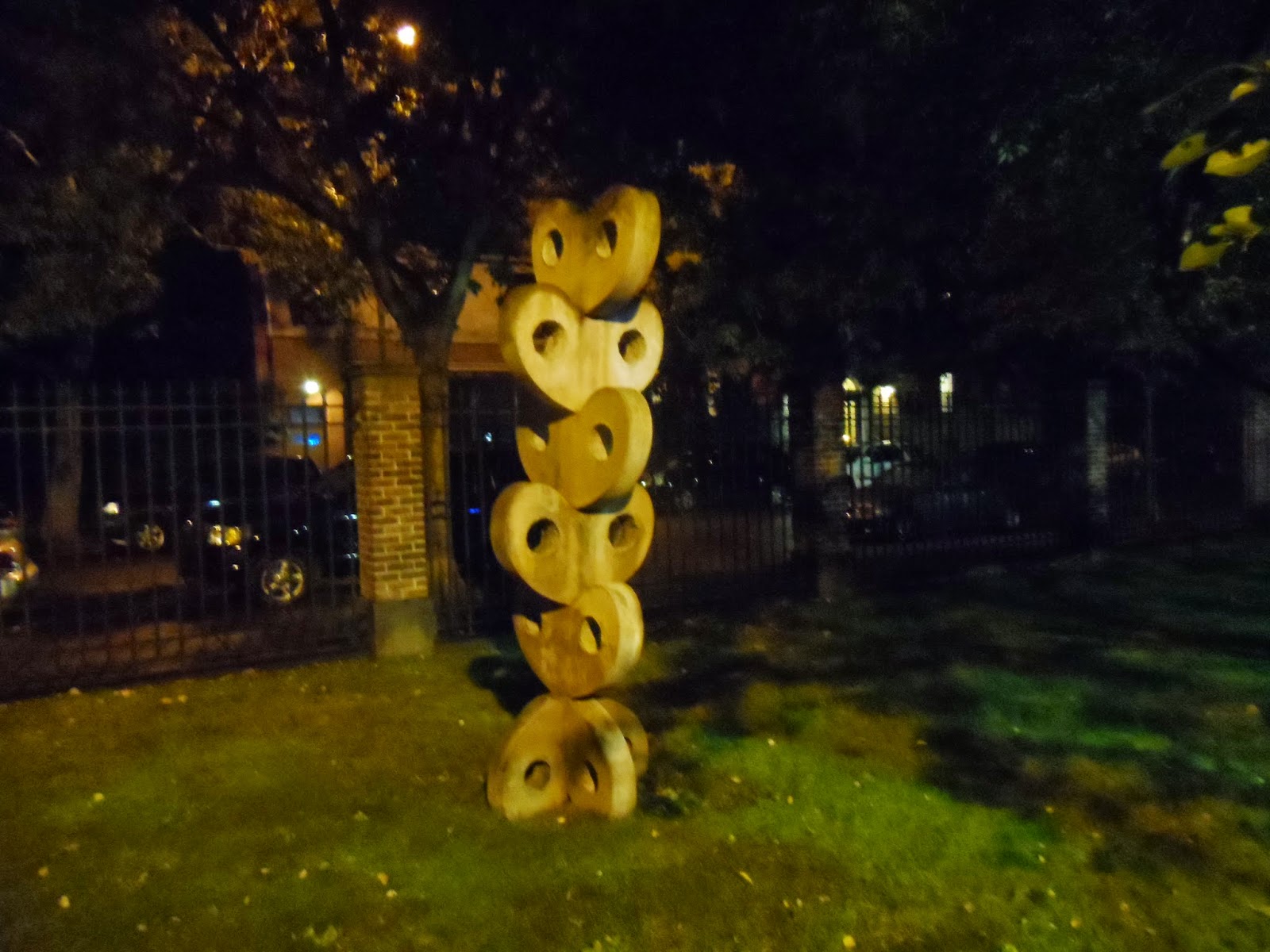 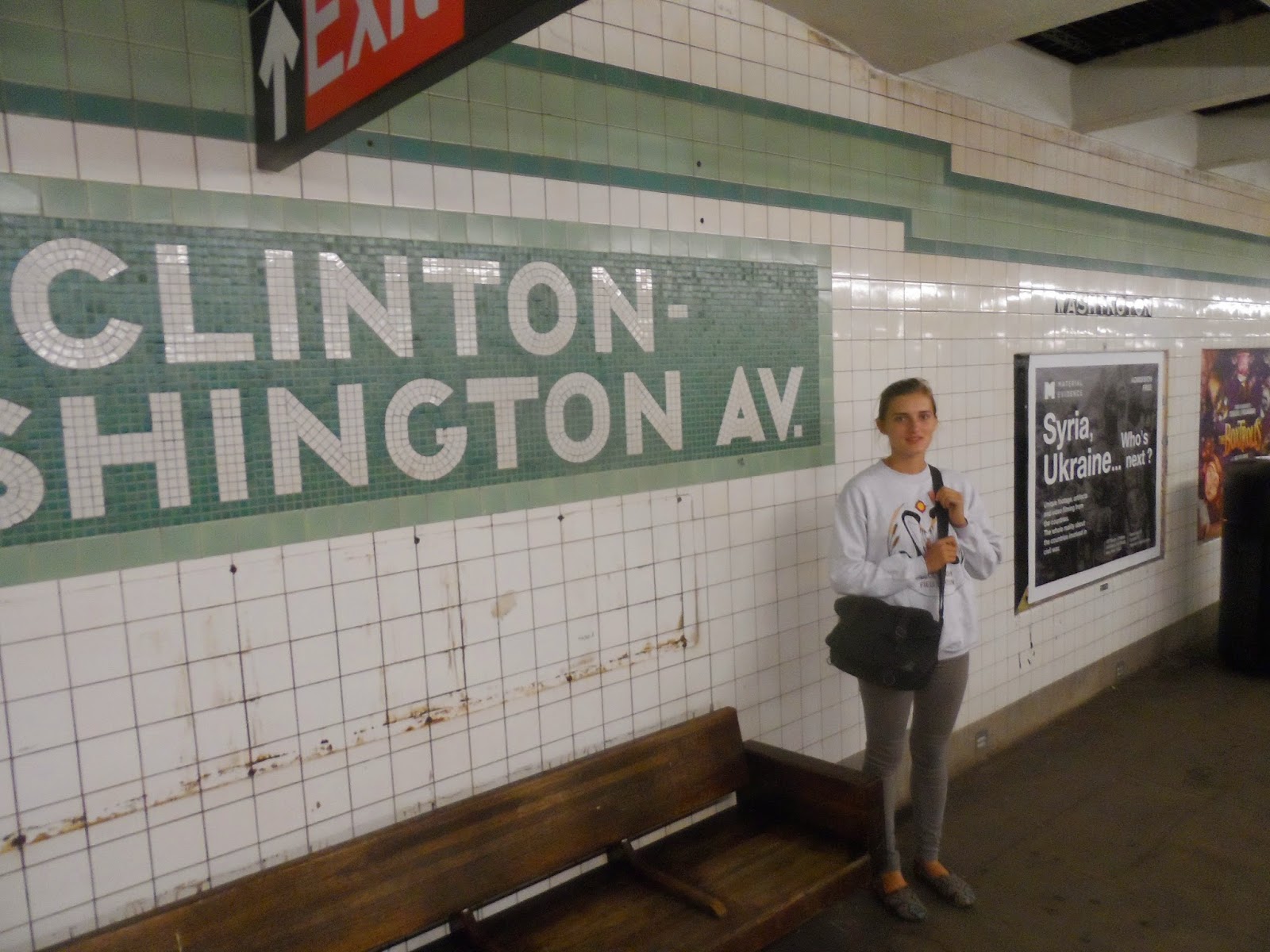 William gave Pratt hospitality to me an Caitlin but whimped out on getting up early for the kick-off to the march which started at around 7:00 AM.

That's what this post is mainly about.  The kickoff was a ceremony by indigenous people.  There were about 100 people in a circle observing and it seems like about 20 participants.  It had this much in common with religious ceremonies from my youth.  There was incense.  People speaking in languages most of the crowd did not understand.  And some genuflecting. Actually people kneeled a couple of times but I decided to genuflect since I would otherwise have trouble getting back up again.

In the intro to the ceremony is where I learned we were in Lenape country.  The native peoples always ask permission and consult with the original people before performing ceremonies.


The ceremonies were different from those of my youth in that there were a lot of women participating.  There were guys blowing conch shells to get our attention.  Quite a few people had us turn around to face the cardinal directions.  Despite the illusion that the Manhattan grid gives you uptown is not actually exactly north.

Here are some pictures of the beginning.  No photographs were allowed during the ceremony 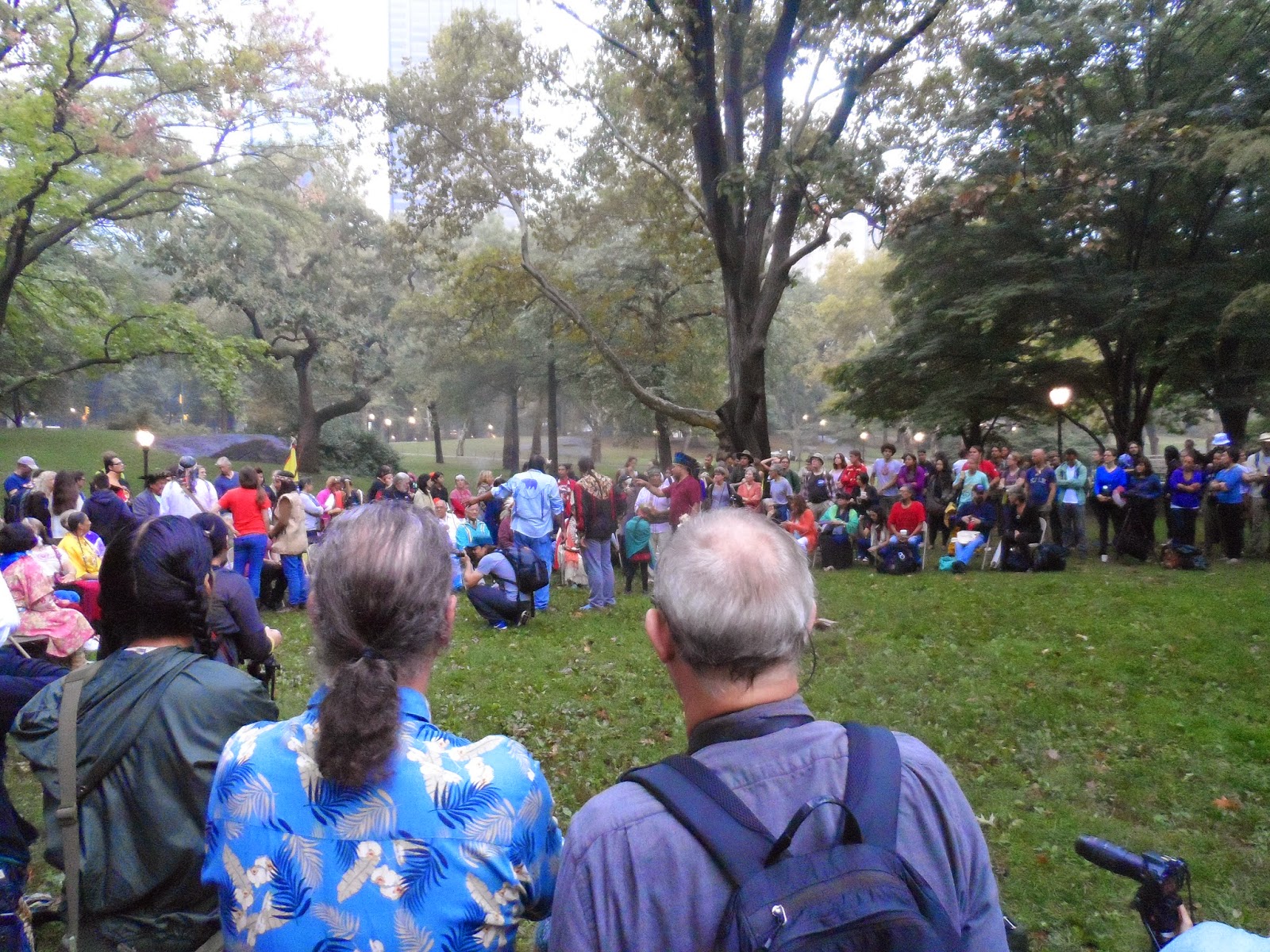 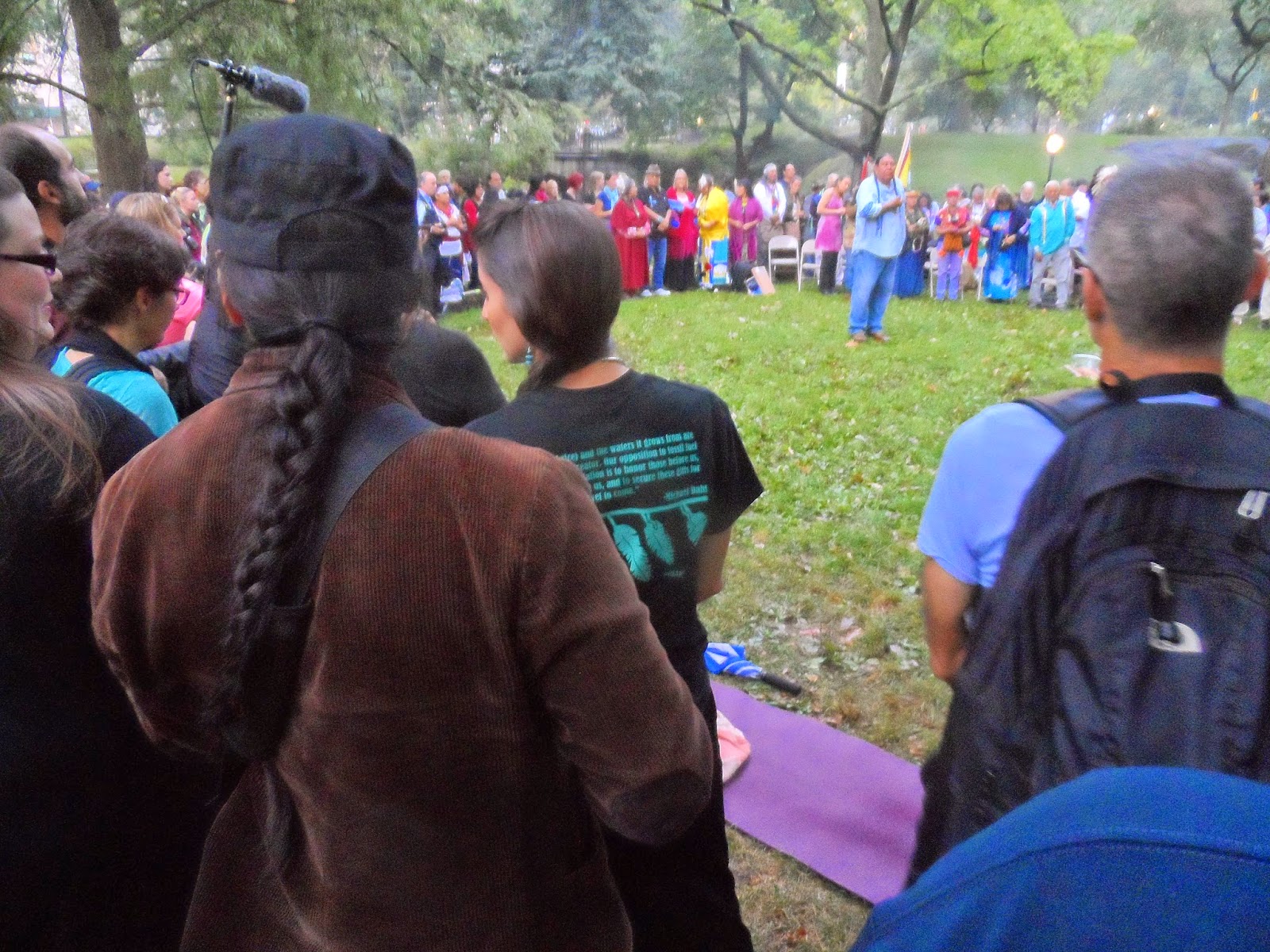 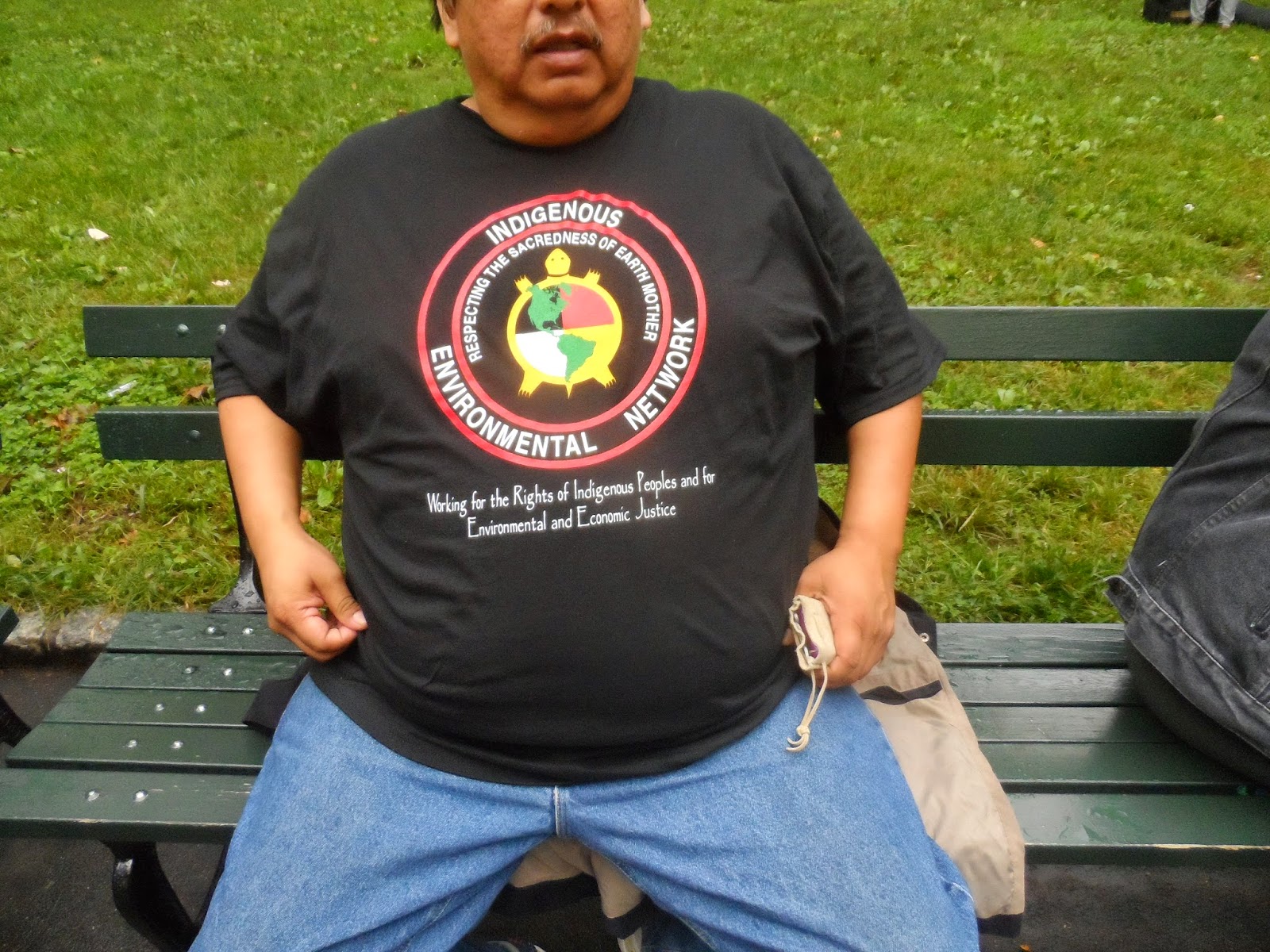 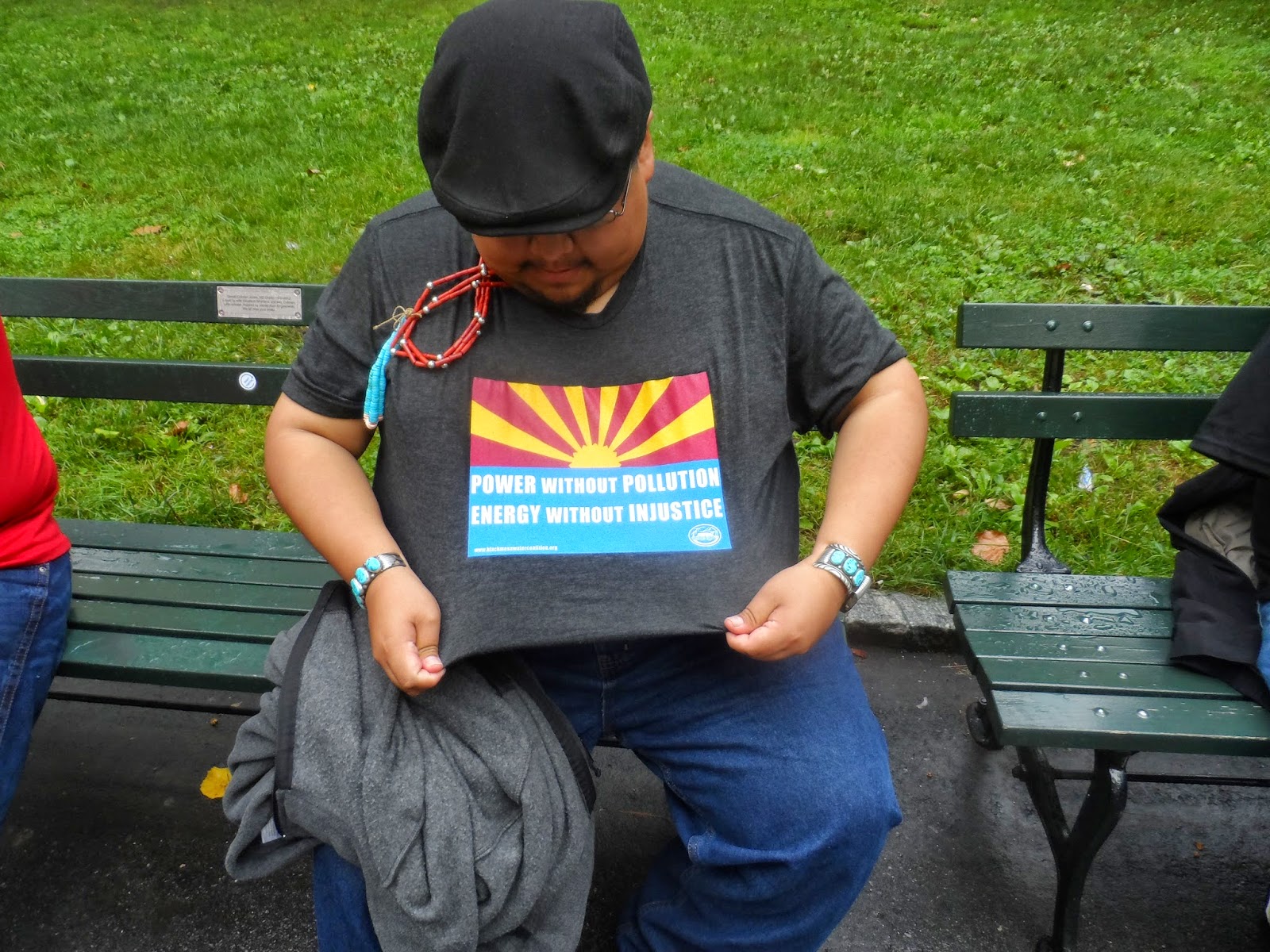 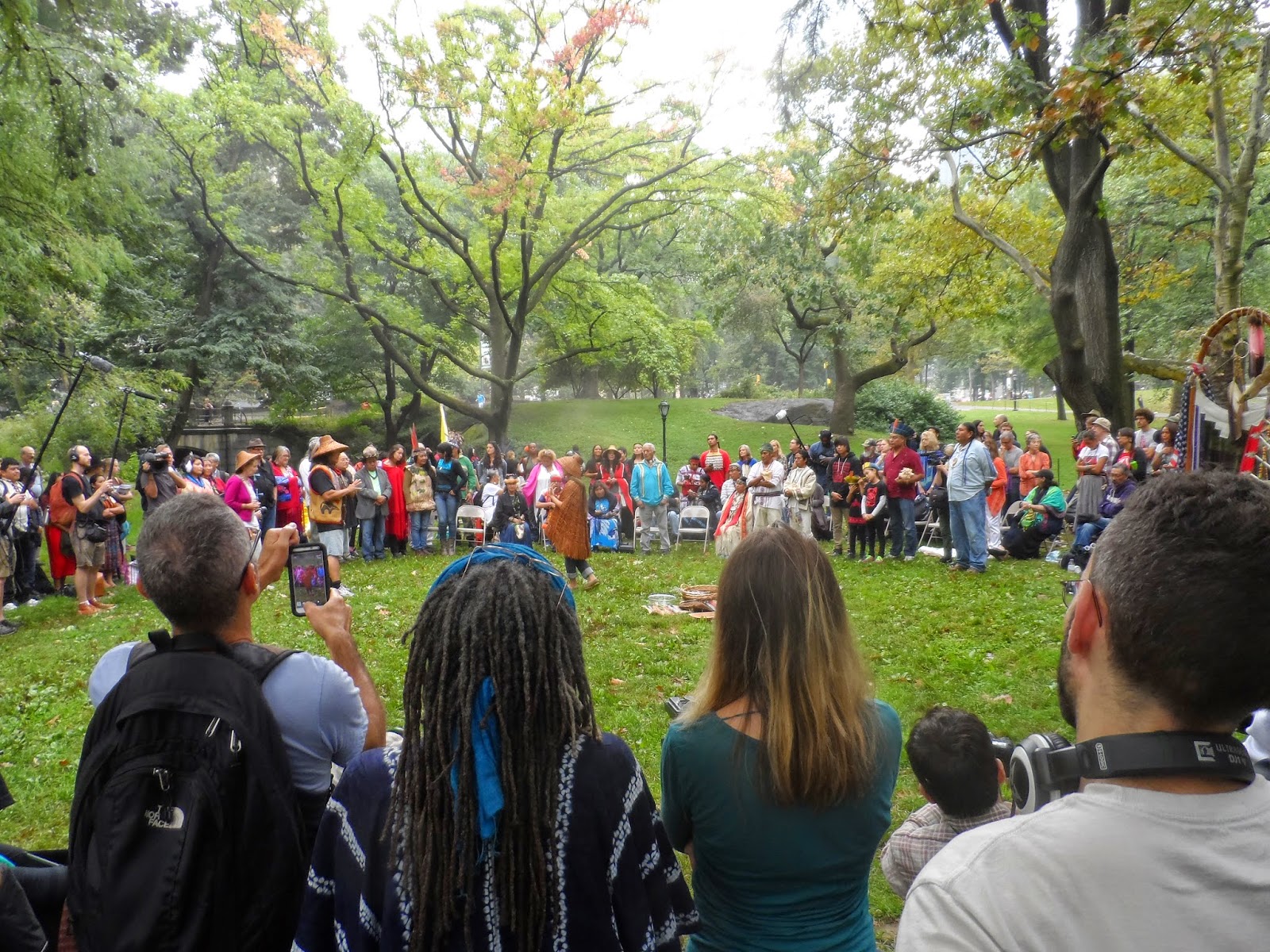 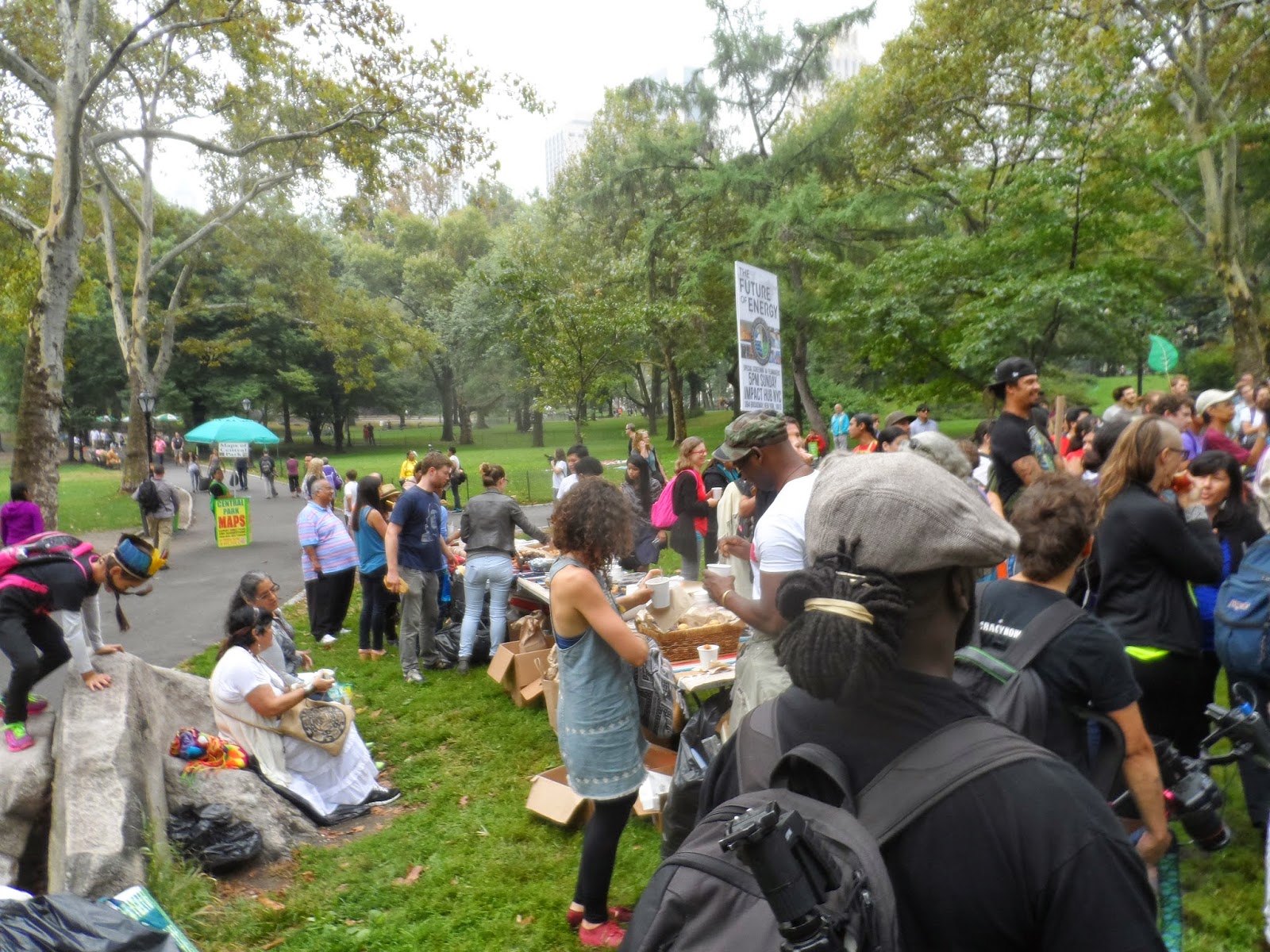 The indigenous people will be leading the march, so I need to go find a group further back to start with.  The ceremonies had a couple of moving points as we asked for the earth to forgive us and give us another chance.  I'm sure you will be able to find a better account somewhere else and I need to get going,
Posted by Peter Reilly at 10:48 AM