USCT Reenactor Responds To The Neoconfederate From Bavaria

Back in June I had a guest post from Georg Snatzke about his experience of the Civil War Sesquicentennial.  Georg is from Bavaria,  He dedicated his vacatons from 2011 till 2015 to Sesquicentennial real time events (Being at the exact spot exactly 150 years after key events).  I ran into Georg at both Antietam and Appomattox.  Georg has a very unusual perspective as he came to his engagement with what he calls the War Between the States (He is just being polite to me.  He really thinks War of Northern Aggression).

I'm still working, off and on, on my response, but in the mean time I have gotten some help from somebody else who I met at two different events.  I ran into Steward Henderson at Chancellorsville and at the Grand Review.  Steward Henderson is the President of the 23rd USCT Regiment. 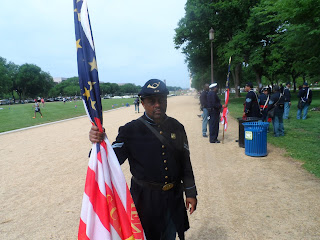 I think the blog was very interesting and to me, it looks as if Georg has researched our Civil War, much more than the average American.  He is far more knowledgeable than most of the people that I see in the battlefields.  He is very thoughtful in his analysis of the reasons for the war, although he had read a lot of Southern "Lost Cause" materials.  He then read some Northern information.  He does make points of what I often discuss, while the South fights to perpetuate slavery, the North is fighting to save the Union and a democratic government - a government governed by mostly Southern or Southern leaning politicians for most of its young life.  So when the South loses control of the government, then it wants to leave the Union.  They never left it when they ruled the government, so why should they when they lost the election.  The country goes back to their way of thinking from 1876 until the late 1960's, anyway.

All of the secession documents of 1860 and 1861, including the Confederate constitution showed that secession was because of slavery and not the tariff, nor states rights.  The only state right mentioned is to sustain and perpetuate slavery.  Later, he writes of the Confederacy choosing to free slaves to fight for the Confederacy, however, in the final documents many do not agree to free slaves if they fight for the Confederacy.  The couple of companies of black Confederate soldiers get captured very shortly after they are sent into the war.  Many in the Confederate Congress and some of the Confederate states do not approve of black soldiers.   They debate this issue from November 1864 to March 1865, in fact when General Patrick Cleburne tried to bring it up in January 1864, he is told never to bring this issue up again.  He was the Stonewall of the West, possibly the best Confederate general in that theater of war and he never gets promoted again.

He does not mention, as far as I can remember, anything about the USCT.  In fact, he does not even address black people other than the slaves, there were over 450,000 free blacks in the country.  Yes, I wish he could have listened to some of the black historians that were at the Grand Review or the African American Civil War Museum.

I still think that overall, he has a very good grasp of the Civil War and he can readily distinguish the Southern propaganda from the actual truth.  He also should remember that the North was just as racist, if not more racist than the South in its treatment of black people.  The North was only 10% abolitionist, when the war started and Reconstruction did not give black people very much relief, then led to the Jim Crow period of US history.


I am glad that foreign Civil War buffs are more objective than American ones.  He can distinguish that soldiers fought for their own reasons - both North and South.  However, all soldiers knew as early as 1863 that no matter which flag they fought under, they fought for their governments.  At that time going forward, the North fought for freedom of the slaves and the South for slavery.  We must also remember that we are not responsible for what our ancestors did - they lived in a different time with different mores.  In fact, the government had tried to resolve slavery issues  since before we became a country.   Our big problem today, is that we want to make everything about the Civil War politically correct for our own time period - not for their time.