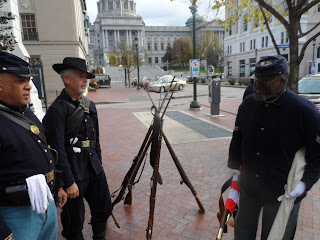 I met  Michael Schaffner (center in picture above) at the absolutely final Civil War Sesquicentennial event - The Grand Review in Harrisburg in November.  Black troops had been excluded from the original Grand Review in Washington in May 1865 (although not from its sesquicentennial which was sponsored by the African American Civil War Museum). So the City of Harrisburg had a grand review for them.

Michael has done a lot of Civil War reenacting over the years.  His current gig though with Company B of the 54th Mass seems to have inspired a great passion for telling the story of African American troops in the Civil War.  He also seems to have a thing for poking fun at neo-confederates, like this recent facebook post


On this day in 1861 the Confederate government adopted a constitution virtually identical to that of the republic it rebelled against, the principal differences being a six year presidential term, a line item veto, and an absolute prohibition of any law limiting slave ownership. Over the next four years an estimated 7-800,000 Americans will die over the line item veto.

Recently he posted a statement he made in opposition to a resolution by a reenactors umbrella group on the display of the Confederate battle flag and preservation of Confederate monuments.  He gave me permission to reproduce it.  Here it is.

Good morning.  My name is Michael Schaffner, I'm a member of the Brady Sharp Shooters in the USV's Sharpshooter Battalion.  In the interests of full disclosure, I should mention that I'm also a dues paying member of the United States Colored Troops Living History Association, an officer with Company B, 54th Massachusetts, and I volunteer at the African American Civil War Museum.
I joined the USV to reenact, not to discuss modern politics.  But if you want to go there, I'll have my say, and when it comes to the rebel flag so will the USCT.

When the best thing we can say about a flag is that it flew over brave men fighting for a cause that U. S. Grant called "one of the worst for which a people ever fought, and one for which there was the least excuse," we really haven't got much to say for it.

The CBF may be an important piece of our history, but not in any good way.  It has a place in reenactments and museums but its use outside of those venues has been, for many of our fellow citizens, corrupted by racism.  And frankly, I care more about their real suffering than I do about those who are offended that the CBF is no longer accepted in polite society.

I also don't oppose the removal of monuments or markers where the local citizenry consider it appropriate.  For instance, in New Orleans, the city council voted to remove statues of Lee, Davis, and Beauregard.  Some people say that's censoring history.  But if that were true we'd be talking about monuments for Farragut, Butler, and the Louisiana Native Guards.  Those three rebels never were in the city during the war, and New Orleans was "Confederate" for less than a year.  Those statues aren't civil war history -- they're Jim Crow propaganda from years later.  Is that what we want to support?

Last year the South Carolina legislature voted to take down the CBF at the capitol.  That flag wasn't civil war -- it was raised in 1960 during the civil rights era.  Should the USV have stood with the South Carolina legislators of 1860 and 1960 against the ones of 2015?  Do you realize how ridiculous that would look?  Because what they did last year wasn't "politically correct" -- it was just correct.  I know some of us are getting on in years, but do we want this organization to grow and thrive, or stay stuck in the last century?

That's not to say that all Confederate monuments should come down, only that not all the existing memorials are sacred or even especially historical.  If people in those parts want to change them, let them.  That's the point in question across the country -- where is it proper and appropriate to fly the banner of the slaveholders' rebellion, and who decides?  What business is it of the USV's?

I'm also struck by the resolution's reference to Confederate veterans as U.S. veterans.  Not only is that not quite true, it presents its own counter argument.  If they are "U.S." veterans, then the only proper decoration for their graves is Old Glory, and the CBF has no place in the matter.

But the greatest fiction in the resolution is the assumption that there was some golden era in which the CBF was not a "symbol of hate."  It was always a symbol of hate and racism.  The whole point of the rebellion was to perpetuate the enslavement of African Americans.

On May 1, 1863, the Confederate congress adopted the same flag on a white background as the Second National flag.  Its designer, William Thompson, and people throughout the Confederacy hailed it as "the White Man's Flag."  It didn't take the KKK to make it racist.  It was racist from the start.

I'm sure that if Thompson were here today he wouldn't like what I say about his flag.  But he'd be aghast to hear its defenders claim it wasn't about race.  Of course it was about race.  They were proud of it.

On that same date, knowing that the federal government had at last allowed African Americans to enlist in the United States Army, the Confederate Congress passed the Retaliatory Act.  That law called for the enslavement of black POWs and the trial and execution of their white officers for "inciting servile insurrection."  The trials were to be conducted by officers of the troops taking such prisoners -- that is, under the flag on which the resolution confers blamelessness.

The shortest volume in the history of the civil war is the story of black POWs.  That's why exchanges were suspended.  Thousands of United States soldiers were killed outright or disappeared after capture.  Few were "lucky" enough to reach Andersonville.  At the Crater the Fourth Division of the Ninth Corps counted some 800 men as missing in action.  The Confederate provost counted 216 as prisoners.

I'll repeat a few key words -- United States soldiers.  Enslaved.  Executed.  Under that flag.  The KKK didn't make it racist; it already was.

I don't want to be part of an organization that glosses that over.  And it doesn't matter to me whether it's from ignorance or actual malice.

Many of you know me; I've reenacted both sides at several ranks.   In fact, some of my best times in the hobby have been in gray.  For seven or eight years running I served as the Confederate chief of staff at Neshaminy.  Twice I've made the A. P. Hill March from Harper's Ferry to Sharpsburg -- 18 miles, a quarter mile of that up to my ass in the Potomac praying I wouldn't drop my Springfield in the middle of Pack Horse Ford.  I spent six days with a wagon train reenacting Kirby Smith's invasion of Kentucky -- let me tell you, you haven't lived till you discover you have chiggers three days into a six day event.

I have tremendous respect for the Confederate soldier.  But let's not kid ourselves -- the cause for which he fought was despicable, and this whole issue isn't about him anyway.  It's about a reenacting organization taking sides in a contemporary political issue that we have no business messing with.

I believe the proposed resolution would do no good for the public image of the USV or reenacting generally. It would also, I believe, prove enabling to neo-Confederates in the ranks of rebel reenactors and dismaying to those who, while wearing gray, nonetheless know what that war was really all about. There are more than a few, and they don't need this. As for the others, I think we should respectfully decline their gracious invitation to join them as they stand, once more, on the wrong side of history. Thank you for hearing me out. Remember Fort Pillow.

Text of proposed resolution follows.] Resolution of the United States Volunteers (USV) Regarding the Display and Use of the ANV's Battle Flag August 28, 2015 WHEREAS, the United States Volunteers (USV), as historical reenactors, Civil War historians, educators and volunteers at numerous national, state and local historic sites, condemn the designation or use of the Army of Northern Virginia's (ANV) Battle Flag or the flag of the United States as a symbol for any and all hate groups; and WHEREAS, the square and white bordered ANV Regimental Battle Flags were presented to the Army of Northern Virginia, under Gen. Robert E. Lee, in camp at Manassas, Va. on November 28, 1861, while other Confederate armies - independent of the national colors of the Confederacy - developed other important historical Regimental battle flags, and WHEREAS, we, support the proper flying of the ANV Battle Flag, in its proper context as an important historical piece of military and this nation's history; and WHEREAS, we oppose the removal of the ANV Battle Flag from and the removal of any Confederate military monuments or markers and/or the abandonment of any honors to those gallant soldiers of the former Confederate States, and WHEREAS, we recognize that the ANV Battle Flag serves as a reminder of this nation's bloodiest war. Without a full and proper understanding of the many causes and actions that led to the Civil War, the ANV Battle Flag and the men who fought under it will forever be inappropriately maligned and compared; and WHEREAS, the descendants of Union soldiers and sailors and Confederate soldiers and sailors met in joint reunions in bonds of Fraternal Friendship, designated as American veterans. THEREFORE BE IT RESOLVED that we, adopt this resolution: The United States Volunteers (USV), supports the historical ANV's Battle Flag and will oppose and will not support those who act to usurp that flag as a symbol of hate.

Peter J. Reilly hopes to be the first tax blogger to give up his day job. Guest posts are a key part of his strategy.
Posted by Peter Reilly at 7:56 PM