My account of Xavier High School's last years as a "thoroughly military academy" to quote one of Xavier's most famous if not most beloved sons - Antonin Scalia Class of 1953 - might appear to have stalled, but I've been working on a difficult section.  Thankfully, John Frank has come to my rescue.  John reports here on the 45th reunion of the Class of 1971 and the memories they shared.

After they graduated, the military become optional.  When I was a freshman Mr Lux SJ had been my Latin and homeroom teacher.  In 1971 Father Lux became the Prefect of Discipline. He recently explained the denouement to me in an email.


The sixties were certainly a different era. As you know I took over that revamped office from Fr. Heavey.  During a couple of years before my ordination in June 1971, Father Wood was the rector at XHS. There were continuing conversations during those years on the role of the military and the impact of the Vietnam war on the student morale at XHS. With great deliberation and after exhaustive consultation with all the constituencies of the school, Father Wood made the decision to have an optional JROTC program at the school. From 71 through my three years in that office the JROTC program had a 33% enrollment. And there was no conflict whatsoever when I was moderator with those in or out of the military. The student body without exception accepted the decisions of other students. I worked with Sergeant Major Carney for those years and he was a great teacher and leader by example.

Incidentally, in the dictionary next to the definition of soldier they could put a picture of Sergeant Major Carney.

Anyway, I'm kind of a numbers guy, so I've got to say that even though they still call it a Regiment, at 1/3 of the student body it is more of an under-strength battalion making John's classmate Bob Meisner, the last Colonel. My friend Jerry Snee also class of 1971 told me an interesting story about Colonels Day that year.  (I have to say that Colonel's Day never made that big an impression on me.  It was just one of those schola brevis church parade days as far as I knew.)  Jerry had devoted himself to being the colonel of 71 and came achingly close being named the Regimental Executive Officer.  The tradition was that he would draw his saber to salute the new colonel and the rest of the Regiment would hand salute.  The Jesuit in charge of the ceremony told Jerry that there would be no saber drawing on the altar on his watch, so Bob had to settle for a hand salute from his XO.

Peter, who was a year ahead of me and with whom I spent many days in the chess club trying to become the new Bobby Fischer, has been recounting his recollections of Xavier here already.

It’s fair to say that Xavier was a nexus for so many social and national crosscurrents sweeping America in the turbulent 1960s. It was a military school when the Vietnam War was ripping the country apart. To add to the tension, it stood on the edge of Greenwich Village, about as counter-culture a place as you could find at the time.

And in an era when suburban flight was rampant in big cities, it drew suburban students back into the city, offering more, in their parents eyes, than the massive suburban high school campuses that were springing up to serve their new communities.

Xavier was also a Jesuit school, which meant the social justice currents of the civil rights movement and the upheaval in the Catholic Church post-Vatican II were on full display.

A classmate mentioned at our reunion that it you tried to create a Xavier for a fictional story about the 1960s, people wouldn’t believe it could exist. But it did and does, albeit in a much different form today. And, by the way, I’ve tried to capture it in my new play, The Institute, which you can read more about on my theater’s website. 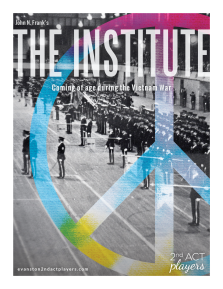 We discussed all of this and much more in the two nights of events that made up our reunion. And whatever our feelings about all those issues swirling around the school in those days, we all agreed it was a unique place that we loved.

There were jocks at Xavier and nerds (we were all nerds really) and musicians and future doctors, engineers and others, but we really never felt there were the cliques you see so much about in almost every movie about high school.

I  contend that was because of the military uniforms we wore and the haircuts we were required to get.

We first judge people by how they look…so when everyone looks the same, you have to think a little harder, spend a little time getting to know people before you decide if they’re people you want to associate with or not.  Xavier gave us that time, and again encouraged us to get comfortable with people we might never had gotten close to otherwise.

As we exchanged stories about teachers who threw erasers at us or stuffed people who weren’t behaving into lockers or held them out windows by their ankles (actual events all, I saw the first two and the third is class legend), it struck me that life at Xavier was a bit like the Bible and its view of God.

Freshman and sophomore years were Old Testament God all the way…strict discipline, rote learning (we memorized everything), constant toughening. Junior and senior year were New Testament God as seen through a Jesuit lens…love God, love your neighbor. After that, you’re free to question any and every rule of the church and the world.

Was that the plan all along, or was that a reflection of the massive changes our country was going through? I’d like to think it was a Jesuit plan and I’m sure they’d be happy to take credit for it.

I felt this reunion included more looking back than past ones had. We held our first event of the weekend at the 69th Regiment Armory where we drilled every week, so that likely prompted a lot of the looking back that night.

But our age had a lot to do with it too, I’m sure. We’re in our 60s now, a good portion of us have retired or are looking ahead to retirement. And that leaves those of us who were trained to lead, to be innovative, to be creative, wondering…well, what do we do now?

Our colonel, Bob Meisner, led a ceremony Friday night to recognize the departed members of our class, about a tenth of us, which for me only reinforced that we are so much closer to the end of our journey than the beginning as we were when we were at Xavier.  Touring the building with a fresh-faced senior lieutenant colonel reinforced that. He can’t imagine all life has ahead for him in his next 45 years before he’s our age…just as he can’t imagine being our age!

Some of us talked about caring for very elderly parents, others about new work projects, even new products they planned to launch.  I talked about my theater, a project that grew out of me wanting to write plays and to not wait for other people to decide to produce them after I decided to end my 39-year journalism career because of heart-health issues that had required surgery in 2012.

But mostly we talked about, and relived the past…all the great plays and actors we had seen thanks to Mr. Moroney (who came to our Friday event) – Henry Fonda, Helen Hayes, Jimmy Stewart, a very young Al Pacino…all the adventures we had drinking, underage, at places like McSorley’s, Steak & Brew and the Hofbrau House in Yorkville where we’d sit in the back room and sing German songs…all the times we had rushed to windows on the 16th Street side to see the prostitutes who lived across the street (Chelsea was much different in those days). They would stand naked in their windows around first period every day our junior year.

We remembered Miss Salvati (whom had already been mentioned in Peter’s blog) and how she helped us when we needed help…and Mr. Donelan who was simply crazy…and many legendary teachers I somehow managed to never have, like Mr. Wohling, Mr. Pacquin, Mr. (later Fr.) Lux…and every time we mentioned a name, it was like a magic incantation making us young again in 1967.

Xavier set us on our way back then, we had come back to say thanks and we left, hopefully, infused with that magic of our youth when no challenge seemed too large because we were Sons of Xavier.


While at Xavier, I never fully appreciated the heritage of the 69th.  They were the First Regiment of Thomas Francis Meagher's Irish Brigade which played a large part in ending the pervasive prejudice against Irish Catholics, then the most despised white people in the United States. When I was at Gettysburg for the Sesquicentennial I ran into someone who was in a society dedicated to Irish Military History, which until the 20th Century mainly concerned itself with Irish men fighting for other countries.

One of my favorite song lines is from a song about another Irish Brigade that fought for France.
- "And they, who survived, Fought and drank as of yore, But the land of their heart's hope. They never saw more,"

John Frank after 35 years in journalism is now a playwright.  His upcoming work The Institute is based on his experience at Xavier High School.