The American Lynching-Mob is an unpublished typescript. It is nicely bound which I thought might have accounted for it being passed among collectors since 1906, but it turns out that the author's descendent only recently put it on the market.  Dean Richmond Babbitt IV, the author's great grandson, wrote me that he turned it over to Heritage Auctions where it sold in October 2013.  He indicated that he thought he may have been the only family member ever to have read it.  He also said that his grandfather had stories about Rev Babbitt getting death threats for the sentiments he expressed.

I recently obtained it at Elizabeth's Auctions. It is a really interesting piece of work.  It is a shame that it has not yet attracted any scholarly attention.  Fixing that is the main purpose of this post. The American Lynching-Mob adds a new dimension to a critical period in the history of the civil rights movement. 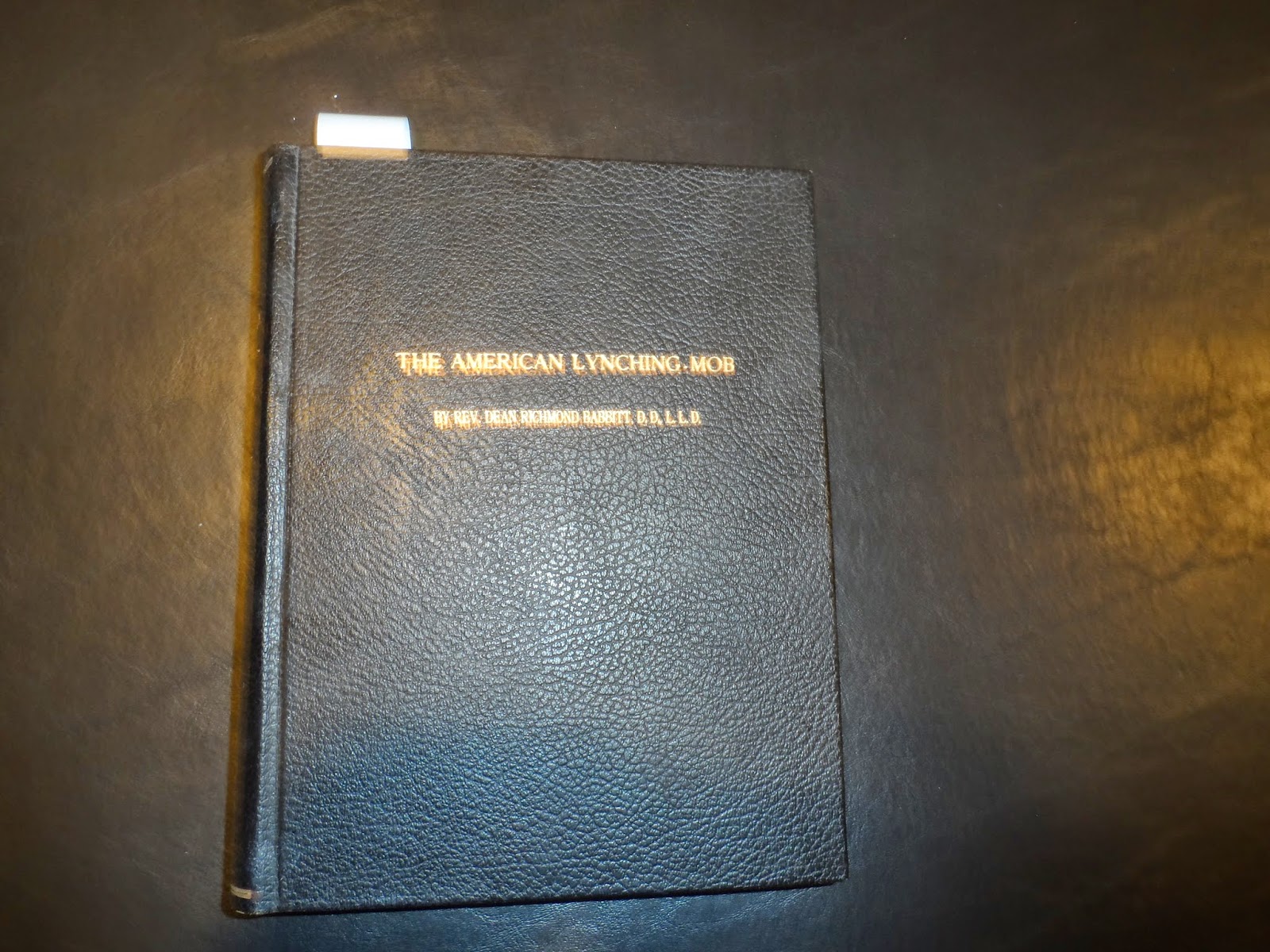 The decades around the turn of the twentieth century might be viewed as the best of times and the worst of times when it comes to civil rights.  Frankly, the case for best of times is on the weak side.  Some of the mid-century abolitionists were still alive and trying to keep their vision of racial justice intact, their ideology enshrined in Constitutional Amendments Thirteenth through Fifteenth..

Consider Thomas Wentworth Higginson.  Higginson was part of the second generation of abolitionists that abandoned the "non-resistance" stance advocated by William Lloyd Garrison. He participated in the attempted rescue of Anthony Burns, which resulted in the death of a deputy US Marshall, James Batchelder, arguably the first casualty in the Civil War.

In 1902, Higginson  co-authroed the introduction for Susie King Taylor's Reminiscences of My Life In Camp With 33rd United States Colored Troops.  33rd USCT was the redesignation of Higginson's First South Carolina Volunteers, the first regularly mustered in black troops in the Union Army. There was an honor guard of African American soldiers at Higginson's funeral in 1911.

As the abolitionist radicals were fading a new generation of activists was emerging W.E.B Dubois began writing in the 1890s and in 1909 was one of the co-founders of the NAACP.

The case for the worst of times is much stronger.  In the post-reconstruction period, African Americans were systematically disenfranchised, forced into an economically subservient role and had their segregation approved by the Supreme Court in Plessy v Ferguson in 1896.  When Theodore Roosevelt invited Booker T. Washington to dine in the White House in 1901, many whites were utterly scandalized.

Probably the worst manifestation of racism was the lynch mob.  As she shifted from reminiscence to contemplating the scene in 1901, Susie King Taylor wrote:


For two hundred years we had toiled for them ; the war of 1861 came and was ended, and we thought our race was forever freed from bondage, and that the two races could live in unity with each other, but when we read almost every day of what is being done to my race by some whites in the South, I sometimes ask, " Was the war in vain ? Has it brought freedom, in the full sense of the word, or has it not made our condition more hopeless ? " In this " land of the free " we are burned, tortured, and denied a fair trial, murdered for any imaginary wrong conceived in the brain of the negro-hating white man. There is no redress for us from a government which promised to protect all under its flag. It seems a mystery to me. They say, " One flag, one nation, one country in divisible." Is this true ? Can we say this truth fully, when one race is allowed to burn, hang, and inflict the most horrible torture weekly, monthly, on another ? No, we cannot sing, " My country, 't is of thee, Sweet land of Liberty" ! It is hollow mockery.

Taylor, of course, is referring to the epidemic of lynching that characterize the period.  According to wikipedia


More than 85 percent of the estimated 5,000 lynchings in the post-Civil War period occurred in the Southern states. 1892 was a peak year when 161 African Americans were lynched. The creation of the Jim Crow laws, beginning in the 1890s, completed the revival of white supremacy in the South. Terror and lynching were used to enforce both these formal laws and a variety of unwritten rules of conduct meant to assert white domination. In most years from 1889 to 1923, 50 to 100 lynchings occurred annually across the South.

This was the environment in which Reverend Babbitt studied and wrote.

Reverend Babbitt was born in Cincinnati in 1850.  He ran a newspaper in Tennessee and worked as an attorney in Cincinnati before entering Harvard and taking a course at the Cambridge Theological Seminary.  He had an LL.D from Harvard in 1886. That places Babbitt at Harvard as the career of William James, American pioneer in psychology and brother of novelist Henry James, was peaking.  William James wrote the introduction to The American Lynching-Mob,

Babbitt came from a family with a strong abolitionist tradition. His uncle, Dr. Gamaliel Bailey, originally published  Uncle Tom's Cabin  in his National Era as a serial titled "How A Man Became A Thing".   Bailey's offices were mobbed several time, something which motivated Babbitt's interest in mobs. When Babbitt spoke at the Washington Conference on the Race Problem in the United States, he proudly recalled  a family tradition that Frederick Douglas held him on his knee as an infant.

In his speech on the Psychology of Race Prejudice, he mentions the outrage expressed over Theodore Roosevelt inviting Booker T Washington to dine at the White House.  Babbitt notes

In 1904 an article titled The Psychology of The Lynching Mob was published in Volume 32 of The Arena.  This article appears to be included as a chapter in the typescript beginning on page 82.

In 1903 Babbitt gave a talk titled "A Study of The Lynch Law" at Chautauqua. A summary of his speech appeared here.  The talk was part of a conference and the proceedings were published as the Mob Spirit In America. At the seminar, Babbitt was responding to John Temple Graves "The Mob Spirit in The South", which attributed the lynching phenomenon to defense of Southern womanhood and called for the separation of the races as being the only solution.  Both speeches are included in the typescript beginning at page 286 with Graves being titled  "Lynchings From A Southern View".

Various newspaper accounts that I have found indicate that Babbitt had become recognized as something of an authority on the subject.  Inserted in the typescript is a letter from William Lloyd Garrison praising The Psychology of the Lynching Mob. 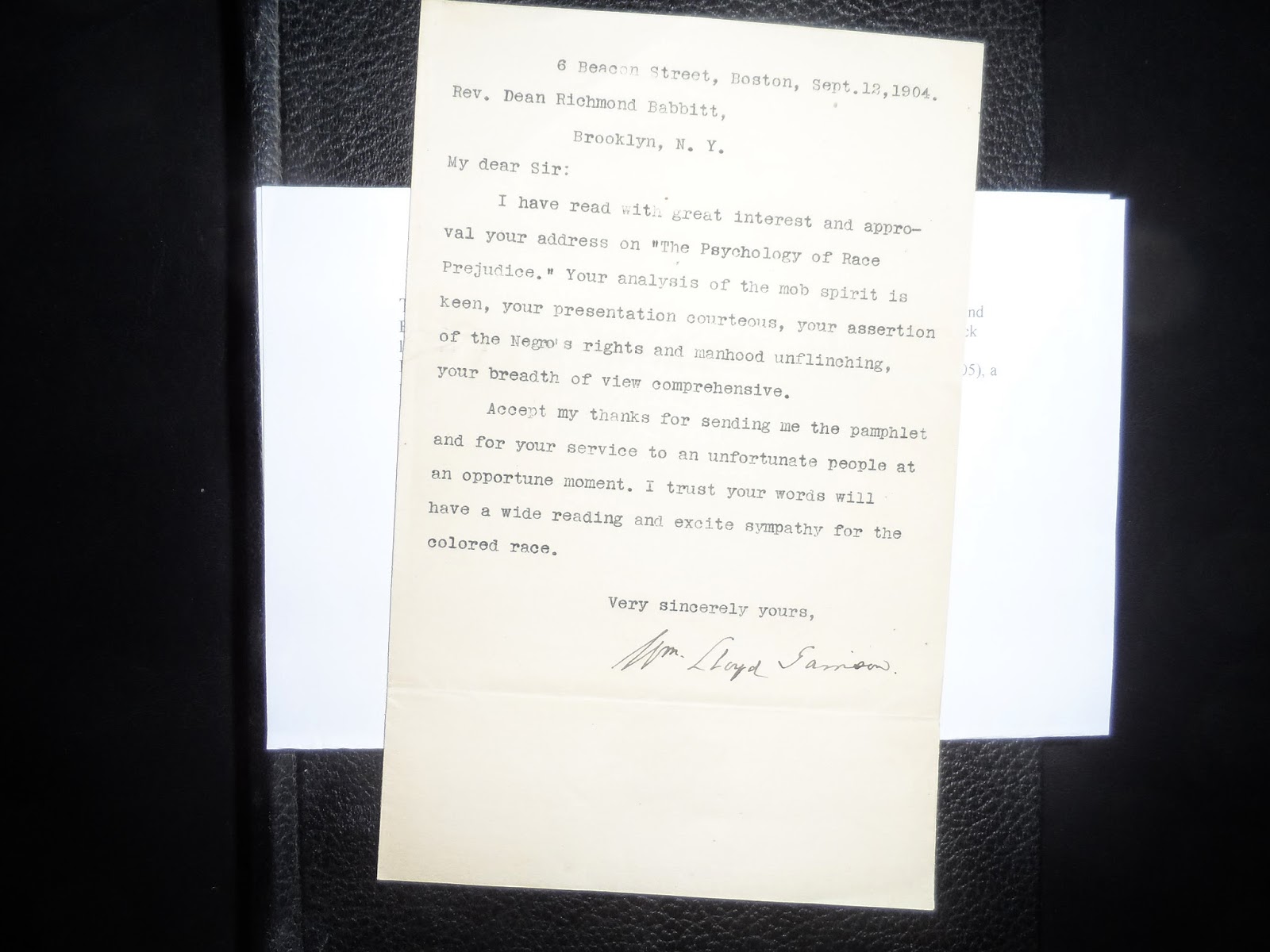 THE William Lloyd Garrison who published the Liberator died in 1879, but his son of the same name had continued in his father's footsteps.  The introduction by William James and dedication to Theodore Roosevelt also indicate that Babbitt was someone to be taken seriously.

They typescript is dated 1906 with the name Paul Munter under the year.  It seems likely that this was the very Paul Munter who took fifth place in the Typerwriting Championship that was held in Madison Square Garden that year.

I'm hoping that someone with better skills than might help get this into easier form.  I have photographed the various sections and put them into manageable pdfs, which have to be downloaded.  I have two pdf files that contain the whole thing, but they seem to be unmanageable.  If there is a better way to do this, feel free to instruct me.

Table of Contents, Preface and Introduction by William James

(Although we normally associate the term with hanging, Reverend Babbitt shows that it originated with all sorts of non-judicial punishment, usually not capital in nature)

The Psychology Of Race Prejudice

On the night of June 22, 1903 a mob stormed the jail in Wilmington Delaware and seized accused murderer George White, dragged him to the scene of the crime and burned him at the stake.  Reverend Babbitt went to Delaware immediately after the event and interviewed local officials and some participants.  This particular lynching was the impetus of the Chautauqua conference at which Babbitt and Graves both spoke.  Babbitt reported his investigation in newspaper stories and discussed it in his Chautauqua speech, but I believe that this unpublished version may be more complete.

South's Treatment of The Negro

South's Hatred and Persecution of The Negro

Danger To The Nation

Tragedy of The Negro Woman


Any serious student of the various disciplines impinged by this is welcome to come examine the original.  I can even provide you with hospitality.  I live in Central Massachusetts and my email is peterreillycpa@gmail.com.

I am a contributor to forbes.com, where I mostly write about taxes.