So I've got two books I want to recommend for Memorial Day. I know it is probably too late for you to read them for this Memorial Day, but you can order them.  One of the books is one that I hunted down and the other is one that I picked up, kind of at random at a museum. We'll start with the one I hunted down

The First Marine Captured In Vietnam - A Biography of Donald G. Cook by Donald Price was hunted down by me because of a question that somebody asked me.  I had written about the three Medal of Honor recipients associated with the College of The Holy Cross (which is a pretty respectable number for a small college) and someone asked me but what about our high school.  Almost ten percent of my high school graduating class, Xavier High School in New York City had gone to Holy Cross, which was pretty much par for the course back in the day, when a straight sixteen years of Catholic education was not that uncommon.

Xavier High School was founded in 1847 and again back in the day had mandatory participation in Junior ROTC (It is optional now).  Commuting to high school in Manhattan in our uniforms, we were dubbed the "subway commandos".  At any rate, my answer was that there probably weren't any, since we would have known about them.  But what with the internet and all, I could look it up and it turned out that I was wrong.

Here is the citation for Donald Cook


For conspicuous gallantry and intrepidity at the risk of his life above and beyond the call of duty while interned as a Prisoner of War by the Viet Cong in the Republic of Vietnam during the period 31 December 1964 to 8 December 1967. Despite the fact that by so doing he would bring about harsher treatment for himself, Colonel (then Captain) Cook established himself as the senior prisoner, even though in actuality he was not. Repeatedly assuming more than his share of responsibility for their health, Colonel Cook willingly and unselfishly put the interests of his comrades before that of his own well-being and, eventually, his life. Giving more needy men his medicine and drug allowance while constantly nursing them, he risked infection from contagious diseases while in a rapidly deteriorating state of health. This unselfish and exemplary conduct, coupled with his refusal to stray even the slightest from the Code of Conduct, earned him the deepest respect from not only his fellow prisoners, but his captors as well. Rather than negotiate for his own release or better treatment, he steadfastly frustrated attempts by the Viet Cong to break his indomitable spirit and passed this same resolve on to the men whose well-being he so closely associated himself. Knowing his refusals would prevent his release prior to the end of the war, and also knowing his chances for prolonged survival would be small in the event of continued refusal, he chose nevertheless to adhere to a Code of Conduct far above that which could be expected. His personal valor and exceptional spirit of loyalty in the face of almost certain death reflected the highest credit upon Colonel Cook, the Marine Corps, and the United States Naval Service.


The medal was presented to his surviving spouse in 1980.  The school now has a display in his honor which I saw when I was back for my 45th reunion a few weeks ago.  It was not there in 1995 which was the last reunion I had made. 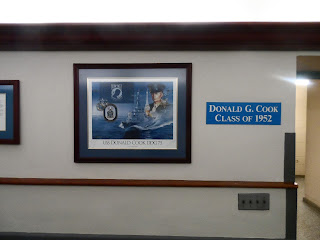 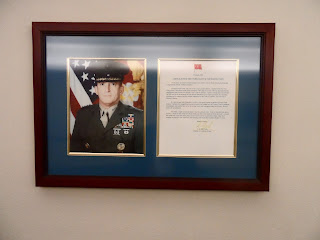 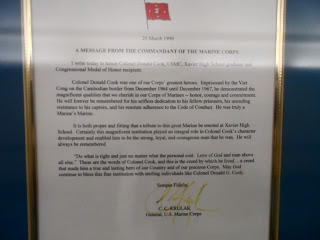 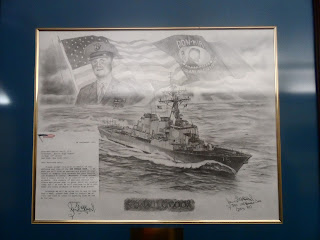 There was something eerie about realizing that while we were freshmen in 1966 learning to march and salute and shine our brass, have a straight gig line and shine those shoes (All things I sucked at by the way), Donald Cook was being held prisoner by the Viet Cong.  The military science faculty consisted  mostly of retired sergeants, but there was an active duty officer and an active duty sergeant both just back from Vietnam.

Price's biography is pretty complete, taking Cook from his early background and following the story through how things worked out of his family and the various places that he is memorialized.  There is also a lot of background on how things were for prisoners of the Viet Cong, a story probably less told than that of those, mostly pilots, held in North Vietnam.

The central part of the story is extremely grim and difficult to get through while also being inspiring as Cook encourages other prisoners and leads by example.  Price's main focus is on Cook as a Marine Corps officers under intensely trying circumstances.

The behaviour of the captors is neither demonized nor whitewashed,  Douglas Ramsey, a State Department employee, held captive by the VC for seven years got to know Cook pretty well and his reports were significant in the award of Cook's MOH.  Speaking about their captors after release, he said:


They ranged from sanity to something out of Marquis de Sade, I ran into some real jewels - some people I would invite today to my home for a drink; others I would invite behind a woodshed, and only one of us would return.

There was a good bit about Don Cook's experience at Xavier, but not quite as much as I had hoped.  The one faculty member that is mentioned as most inspiring is the moderately famous football coach Leo Paquin, who was still there in the late sixties when I was at Xavier. Colonel Price did think the Jesuit education played an important role in forming his character.

The stories illustrating Cook's character began to get to a point that just a bit of skepticism was creeping into me.  If this was a novel, you would think that the fact that Cook was 33 when he died was just going over the top.  (You have to have a certain education to get that reference, but to give you a hint, the novel would change his first name to Jesse or something like that).

There was one detail that only a Xavier graduate can fully appreciate,  Parallel to the academic division of the students into four classes divided into homerooms, the school was organized as a regiment meaning you were a member of a company in a battalion or a special unit and had a rank and position. Keeping your nose clean and getting decent grades would make you a staff sergeant and a squad leader when you were a Junior.

At the beginning  of Senior year all the higher positions were filled.  About a third of the class would become officers including the Colonel, which was a very a big deal.and a third would have the senior NCO positions like company first sergeants.

The other third, well, those were the kids who counted jug (the Jesuit term for detention) as an extra-curricular activity or struggled mightily with their grades.  In my class I heard there was a privates club.  Graduating from Xavier as a private was quite an achievement.  You had to walk a fine line to not get thrown out and not qualify for promotion even once.

Sorry for the TMI there, but here is the detail I found really intriguing.  As Colonel Price explains Cook had a really stellar career in the Marine Corps up to his capture.  And of course nothing tops the Medal of Honor, so Colonel Cook has the most distinguished real military record of any Xavier graduate. In a novel, he would have been the Colonel of the Class of 1952 or if you wanted to point to his future as a hard case prisoner, the novelist would make him part of the privates club.  The reality is that he graduated as Sergeant First Class which is about as mediocre as it is possible to be.

I could not resist asking the author about that odd detail.  He responded:


Yes SFC was not much at that time. Cook had a brash irreverent ability to be dismissive of authority. This helped him as a POW but not as a cadet at Xavier. He only respected the Ultimate Authority. I did not put this in his bio because this personality trait implied that he was a religious fanatic. He was not. He did not fall all over the altar.

Too many projects, too little time, so I have to hope that someone else will someday write a more expansive version of the adventures of Don Cook in his high school days,  The other intriguing detail in the bio that could use more expansion is this one.


He enjoyed life and had a girlfriend in Brooklyn but their relationship was not serious, possibly because her father was Tough Tony Anastasia, brother of Cosa Nostra chief Albert Anastasia

A novelist would really go to town with that.  I can't help but think that a Brooklyn kid in a tough prison would remember something that he heard from Tough Tony about how a prisoner is supposed to keep his mouth shut.

At any rate, this is a really great biography of a really great man.  Just the thing for Memorial Day, but if you are tied up at the barbecue you can read it later along with the book I will tell you about in my next post.

Peter J Reilly CPA  hopes to be the first tax blogger to give up his day job.  His failure to absorb the lessons of neatness and bearing imparted to him at Xavier High School would haunt him in his public accounting career where he was rated poorly by his partners in the category of executive presence.