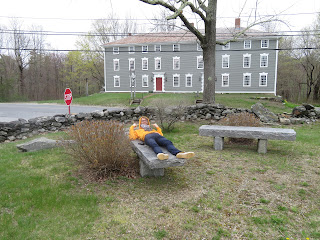 Salem Towne Junior wrote those words to encourage his wife to come to see
how Lafayette was greeted in Boston.  I haven’t found out whether she managed
it, yet. But Mr. Towne might not have realized that there would be a chance to greet
Lafayette in his native Charlton.  Had fortune favored Charlton with an overnight by
the General, he might well have stayed at Salem Towne’s impressive house. It
was a relatively quick stop, so he was at the Rider Tavern on Stafford Street, a
remnant of the Stafford Turnpike, then the main drag connecting Worcester to Hartford.
You can still visit the lovely Towne house, but you have to go to Old Sturbridge Village,
where it was moved in 1952.

Rider Tavern is still where it was though, across from the militia field, which the town
of Charlton has preserved.

And Towne’s prediction that there never will be “such a meeting in this or any
country” holds to this day nearly 200 years later.  Depending on our age we will
each be able to tell a story about exactly where we were when we heard of certain
events and there was a great sense of unity among all of us.

There are not that many though and they are mostly tragic. We can talk about
them some other time. And the reaction went on for days or weeks not a whole year.
Lafayette’s tour lasted a year, but of course for each town he stopped at it might be just
an hour or less.  But when you look you will find that it was the biggest thing that
happened in that town in that decade or more.  People fortunate enough to have had
some role in the greeting of Lafayette would remember it as one of the high
points of their life and it would likely be mentioned in their obituary decades in the future.

On September 1, 2018 at Rider Tavern, we will try to recapture the spirit of the
crowd greeting Lafayette.   The event will not be an attempt at reenactment,
you should go to Old Sturbridge Village on September 2 for that.  (Really you should
go. It is going to be great.) At the Rider Tavern event, time will be a little more fluid.
It will be 2018 and then it will be 1824.  And it might be 1781 when combined
American and French forces defeated Cornwallis at Yorktown. And it might even
be 1944, as striding off the pages of history comes one of the many thousands of
Americans who helped liberate France, just as France helped the United States
achieve Independence.

Among the people greeting Lafayette in 1824 were the first generation to have been
citizens of the United States of America and, pretty far along in years, veterans
of the Revolution.  There were still people alive who had been involved in writing the
Constitution, but that did not prevent contemporaries from arguing as vigorously as we
do now about exactly what it meant and what it did or did not allow.

And perhaps most salient, Lafayette had landed in America during one of the most
divisive and bitter presidential campaigns in the nation’s history even to this day.
For the first time, the President would not be one of the Founding Fathers, since of
course the few that survived were quite old. There was talk of a military coup, in the
event that the election was “stolen” from General Jackson, which in the eyes of some
it was in a “corrupt bargain” between John Quincy Adams and Henry Clay,
as the presidency went to Adams and Clay was named Secretary of State.

Calmer heads prevailed as Lafayette’s secretary remarked in his account of the tour
quoting a strong Jackson partisan:
----------------
“ We were, indeed, very busy shouting; but our adversaries did not take account
of it, and they were right; they have judged us better than we would have wanted
them to. Now that the law has spoken, we have only to obey it. We will second Adams
with the same zeal as if we had supported him; but at the same time, we will shine a
light on his administration, and according to whether it will be good or bad, we will
defend it or attack it. Four years are passed very soon. And the consequences of a bad
election are very easy to repair. –
“Yes,” I said to him, “easier than the consequences of legitimacy or heredity.
– They left me while laughing, and on the following day, no one spoke of the
election any more.”

We sometimes judge the Founders harshly, because there were things that
they sanctioned that deserve harsh judgement.  But those things, like slavery
and the oppression of women, were generally from too narrow a definition of who
was included when they referred to “the People”. Standing on the shoulders of giants
we might see further than they did but we should not congratulate ourselves too
much nor be blind to their breakthrough, as on that day, they celebrated the
hero of two worlds, Lafayette, who having played a key role in two revolutions
still had one more in him as he would in 1830 urge France into an experiment
in constitutional monarchy.

Children and grandchildren of the people present at the Rider Tavern that day
in 1824, would march from Charlton and be buried in places like Antietam,
Gettysburg and Vicksburg.  Go to the center of town and read their names some time.

The results of the 1860 election were not greeted with an attitude of let’s
see what happens and fix it in four years.  The appeal that Abraham Lincoln
made then went unanswered yet it evokes the spirit at the Rider Tavern on that day
in 1824, when they put their differences aside, to celebrate
Lafayette, the Revolution veterans and themselves and their new way of life –

“We must not be enemies. Though passion may have strained it must not
break our bonds of affection.The mystic chords of memory, stretching from
every battlefield and patriot grave to every living heart and hearthstone all
over this broad land, will yet swell the chorus of the Union, when again touched
as surely they will be, by the better angels of our nature.”