A Cheer And A Half For Meritocracy

The system is rigged in favor of anyone who excels at getting her or himself educated to the graduate degree level and then working hard for decades. See, e.g., Barack Obama, Hillary Clinton, Condi Rice, Colin Powell, almost all of the infamous 1%.

The quote above is from one of the several high school classmates that I have reconnected with on Facebook in the last few years.  For purposes of this discussion, I am going to call him CM, although he may want to step forward. Other classmates may figure out who he is, but he did give me permission to use the quote.

Quotes like that are pretty common from him.  He is upset about the Occupy mentality that demeans the 1%.  He also finds the notion of white privilege silly.

As I mentioned we were high school classmates.  Xavier High School in New York City.  Jesuit and military.  A few blocks north of Greenwich Village.  1966-1970.  Interesting times. I've got a series going of Xavier if you want to know more about it, so some of what I say here might seem a bit sketchy because I don't give you enough background.

High points of the school. Considered academically elite among metro New York Catholics, but it was probably not like Deerfield Academy elite.  We commuted to school in uniforms every day.  Three different uniforms. One looked like we were ready to march on Richmond, one like we were in the Army, kind of, and one that looked like we were mailmen or NYC police cadets.

All Deprivation Is Relative

My mother went to some sacrifice to send me to Xavier thinking the male influence would be good for me.  My father had died when I was in eighth grade and we were technically living in poverty, although she at least owned the wall our back was up against. The only really persistent feature of our relative deprivation was that I did not learn to drive until I was 24.

CM's straits were much more dire than that, as he will sometimes mention in his facebook rants.  One of these days I'd like to learn is how Xavier attendance was managed for him given his difficult circumstances. And he did not just get through.  He was a top student and a cadet officer.

Me And My Classmate

He and I were not close.  I forget how we overlapped other than running into one another on the subway here and there.  We were in different homerooms.  Science honors for him and classical honors for me.  Might have had modern language or AP English together.

I remember a couple of interactions and the fallout from one that I don't remember.   The latter was something that he said to me that I made the mistake of mentioning to my mother.  I did not carry a grudge about it but she sure did.  "Wasn't he the kid that said ____________", but I don't remember.

There is one interaction that I particularly remember though from when we were Sophomores just happening to be on the subway, I think.  Besides being divided academically in homerooms, the school was also a Regiment, with each of us having rank and a position of some sort.

As a freshman you were a private and a member of something like the third squad of the second platoon of Company B of the First Batallion. Beginning in sophomore year you could get promoted getting as high as sergeant first class, even though there were not any positions to go around to justify that rank, since the most a junior could be is a squad leader.

All the higher ranks and positions from platoon sergeant to the Colonel went to seniors in one fell swoop at the beginning of senior year.  One of the flaws in the system is that a freshman's first interaction with a senior who was not condescending to him or maybe yelling at him, was with a private standing next to him in the ranks at weekly drill.  The freshman was a private because all freshmen were privates.  The senior was a private after maybe ten or so promotion opportunities had not yielded a single stripe.  To accomplish that without getting thrown out of the school required that you walk a fine line.  Private Senior would be mocking the pretentious of his higher ranking classmates and serving as an allround bad example for Private Freshman.

I imbibed some of that and also a general disrespect for authority to arrive at the conclusion that it was kind of silly to worry about becoming a cadet officer.  CM took the opposite tack in our discussion, indicating that it was quite important.  Hey.  There was a competition and he was going to compete.

As I related in the series.  I never did become a cadet officer, even though I thought it likely that I would.  It bothered me for a few hours mainly because I had lusted after the Sam Browne from which hung a saber on occasions of high ceremony.  And the gold trim that replaced the never used chin strap on the hat.  That was cool.  My consolation was that being First Sergeant of the Regimental Supply Corps was a glorious job much more satisfying than one of the battalion S-4 slots that might have come my way.  Being commander of the Supply Corps - the regimental S-4 - one of the Colonel's 12 apostles, but still a grungy Supply Corps type might have been better, but Paul Fulller probably executed that office better than I would have.

CM, on the other hand, became a cadet officer.  He was, however, much more chagrined than I was at being a second lieutenant making him like everyone in my primary reference group a marvel of military mediocrity.  In the past final rank had been much more attuned to academic standing, but the growing anti-military feelings had, I think, influenced Major Smullin to double down on military merit.   There was also probably some politics going on.  There were stories that having parents who donated to the school or heritage helped in the rank sweepstakes, but I never found any proof of that.  Regardess, neither CM nor I had any of that, nor were we athletes, which helped.  What we had going for us was being top students

Regardless, CM really seemed to feel he was treated unfairly, as was I.

But moving on into the competition of life.  Relative to my background, I did pretty well.  Partner in a large regional CPA firm.  In the bottom tier of the compensation scheme and sometimes on the edge, but still it is not so bad.

CM on the other hand, as far as I can reasonably infer, has greatly exceeded that.  Some multiple of my not so shabby low six digit compensation and likely corresponding net worth.

He attributes that success to hard work and making good decisions.  He believes that he earned it all.  And he really resents attacks on the 1% by Bernie bros and Occupy types and thinks white privilege is bullshit, because he started with zilch and earned it all.  (I may be exaggerating his position a bit)

What Exactly Did You Build?

This is not an uncommon observation among successful people.  There are some features of life that support the observation.  Within each field of endeavor, you might get involved in, there tends to be a certain amount of rough justice.  Figuring out what it takes to get ahead and focusing and executing greatly enhances your chances.

When you think about people who did not do as well as you, you will be able to discern the reasons.  If you have enough humility, you will also be able to discern why others did better.  Often it is true merit.  And sometimes it is because they are bigger pricks than you are. The latter circumstance causes me to withhold total endorsement to our meritocracy.

What I think people like CM can sometimes lose track of is  the truth behind Elizabeth Warren's infamous "You didn't build that" statement.

The play was based on his experience at Xavier, which corresponded closely with that of CM and me.  One of the main characters is excited about being the first generation of his family to go to college.  There is a point at which he feels intimidated by his classmates coming from much more prosperous circumstances.  A teacher points out ot him that they are all dressed the same. We all commuted by bus and subway and wore the same uniform.  Visible differences were based on personal effort and achievement.

Some kids were extra good at shoe shining and brass polishing.  Top students wore honor cords and would advance in rank.  Various activities and achievements would result in  "fruit salad".  The latter has really gotten out of hand among contemporary students, but that is neither here nor there. 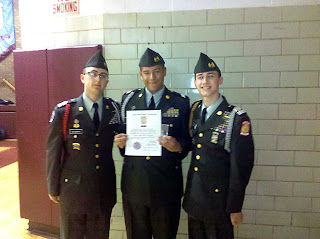 So if you wanted to play Elizabeth Warren  to CM, you might say that the very ethos that led to his success was at least strongly reinforced by the school and he didn't build that.  Whatever the circumstances that allowed him to attend the school despite his dire straits, are also probably something that he didn't build.

What distinguishes someone like CM from the rest of the elite is that they are working without a net.   George Bush Jr. and Donald Trump had multiple second chances. Others get only one shot.  And I think that in the time that CM and I grew up things were not quite as hard for first-generation college graduates.  You could get through without acquiring a crushing debt load and if, like me, you had a false start you could recover more easily.

This, in part, accounts for my being a little more sympathetic to those left behind than CM seems to be.  I also think that you will be happier if you cultivate gratitude for all the undeserved gifts the universe has presented you.  But maybe that is just me.