The final day of my Virginia trip, my last Civil War real time experience (The Grand Review Parade in May is off by over week) worked out better than I dreamed possible. One of the most iconic images of the end of the Army of Northern Virginia is the stacking of the arms under the supervision of respectful Union troops, commanded by Joshua Chamberlain, the former college professor, wounded six times and breveted to major general, who would be awarded the Medal of Honor for his action at Gettysburg on July 2, 1863.

A reenactment of the stacking was done a couple of times a day after the ninth.  I was thinking that the Confederate reenactors must have been getting pretty tired of it.  I watched one of the stacking ceremonies on Saturday, but did not get any good pictures.


I also watched a real time reenactment of the artillery surrender, which was beyond tedious (The artillery and cavalry were surrendered first, because the ANV men were allowed to keep their horses and they wanted to get them moved out to other areas where there might be more fodder.  At least that is what somebody told me.)

At any rate, the final stacking ceremony was a real time event (although actually the real event took all day) at 3:00 PM on the 12th.  Public participation was encouraged. You could choose to march with the surrendering Confederates or stand on the side of the road saluting.  As it worked out all the Union reenactors had taken off by then, so it was all civilians lining the road.  The surrendering Confederates had a goodly complement of reenactors intermingled with the civilians. Row by row roughly four "soldiers", then four "civilians".  I think my "brigade" had about twenty people in it. 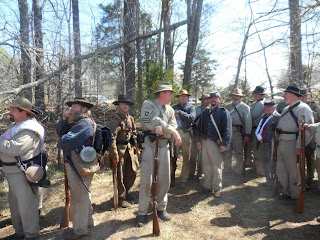 That's right I had decided to be with the Confederates, which I suppose requires some explanation.  Even if it doesn't, I'm going to give it to you anyway. 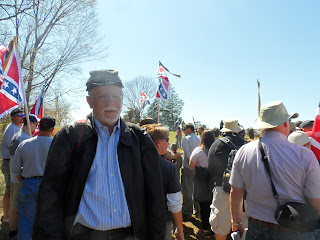 At Gettysburg, the biggest real time event was Pickett's charge, which had the general public doing the long walk across the field led by rangers with some reenactors interspersed.

I thought I would be standing behind the wall wearing my blue keppe, but as I explained in this piece after watching a reenactment on private property on June 30, I decided I had to do the walk.  So I picked up a gray keppe at the sutlers.  I ended up forgetting it at the hotel and doing the walk hatless, but that is neither here nor there.

So mainly I was going with the Confederates so I would be doing something rather than standing around, but I also think that the gray hat had something to do with it.  Lost Cause historiography has a powerful grip on the American imagination, that is is not lost even on someone like me, who is much more interested in antebellum social reform movements and believes that the reeestablishment of white supremacy was an American tragedy, Reconstruction being a great missed opportunity to truly create an indivisible nation with liberty and justice for all.

It was a lucky choice because when I got into line, there was my friend Georg (that's how you spell it). 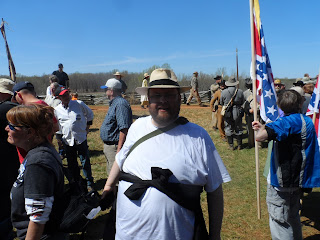 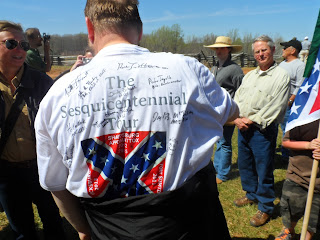 Georg is probably the champion real timer, at least when it comes to distance traveled.  He is a computer scientist from Germany, who has used his six week vacations to be at real time Civil War events beginning, I think with Bull Run .  We met at around 6:00 AM on September 17, 2012 as we walked from our cars to the Cornfield, where according to the park rangers the battle of Antietam/Sharpsburg commenced (Although a somewhat fanatical real timer told me the night before that it was actually elsewhere and earlier).  We spent the day sharing the events, telling one another our life stories and why we found the Late Unpleasantness so fascinating.  The final event of that day was at the cemetery where member of the public were invited to come up and read 10 of the names of men who died at the battle or of wounds received there.  Most of us went up a few times.  It took three hours.

Georg, a computer scientist, is one of the scary smart people whose interest in the Civil War began with playing complex strategy/tactical games.  He was born in 1971 and in the small town in Germany where he grew up there was not much information on the US Civil War.  He told me his mother, who fled Communism in Poland was very much pro-American in those final years of the Cold War.

Georg had some very interesting perspectives.  The midday event at Antietam included ceremonies of a patriotic nature with a strong military presence.  The overall theme of Antietam was mourning, as it was the deadliest day in American history.  At any rate, there were fellows from the Old Guard (The Third Infantry Regiment who inter alia do the burial ceremonies at Arlington) and a speech from a very modern major general (Appomattox had a similar event on the 9th).  Georg said that Germans did not go in for that type of display very much and he had a hard time understanding it and knowing how to behave.

One of the perennial themes of the sesquicentennial was a celebration of American nationalism.  D.W. Griffith's was at least right in that 1865 really was the Birth of A Nation

A couple of historians who spoke at different events pointed out that if the United States was not, you know, united, the history of Europe in the twentieth century would have been quite different as those West Point guys after an epic intramural war in which the Blue team won, but the Gray team put up a heck of a fight went on to a pretty strong century or so of successful war waging including the defeat of the Third Reich.

Growing up in a country where there is still a good bit of unexploded ordnance from the Army Air Corps floating around makes Georg less sanguine about what a good thing American nationalism is.  That's why he was marching with the Confederates rather than standing along the road.  He just could not relate to starting a war to keep states in a country.

We formed up in the ranks of four.  The reenactors with us looked really good, although perhaps not quite ragged enough for real authenticity.

The march was pretty short and I thought all those people on the side of the road saluting was a really nice touch.  We halted, did a left face and stepped back two paces.  We civilians just stood at attention while the reenactors followed the generals orders to fix, bayonets, stack arms, remove accouterments  and unsling cartridge boxes.  The general then told the guys they had been defeated by superior force and should be proud of the jobs they had done as soldiers.

Thus began the next chapter in American history.  Professor David Blight of Yale had spoken earlier that day and told us that the guys from that era might be puzzled by the personal technology that we all carry around, but that the issues of federalism and race that are in our news all the time would have an eerie familiarity for them with some perhaps wondering why we had not yet sorted them out.

So what to do with that damn hat?  I had one of those impulses of generosity of a sort and gave to Georg to take back to Germany.  His insisted that I sign it and said he will cherish it. If only it were so easy to shed white privilege.

In 2013 Georg had not gone to Gettysburg.  He had been at Vicksburg which had a much lighter turnout and had been more or less adopted by Lincoln's Generals.  These guys are not reenactors, but rather historical interpreters. They splintered off from The Confederation of Union Generals.    So Georg and I headed back to the general's camp where he has a standing invitation to sit in General Grant;s tent 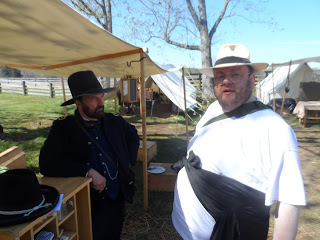 I hope Georg won't mind me stealing a comment from his facebook page to sum up our final hours together.

In the afternoon, the nominal highlight of the day took place: Every visitor who wanted was invited to participate at the surrender ceremony for the Confederate infantry - the stacking of arms and the folding of the flags - which did indeed happen on April 12th 1865. But the National Park Service managed to blow this event big time. While there were a couple of dozens Confederate reenactors still around, there was actually only a blue-clad brass band left over to receive the surrendering army, all other Federal reenactors had already left. So the other visitors who were not surrendering stepped into the breach. Thus we Confederates filed up the old stagecoach road to Appomattox Court House, while ordinary citizens were lining the road and saluting us while the band was playing "Auld lang syne". Somehow this was a very powerful scene. And I liked the idea to surrender to normal people instead to a conquering military.


Then there is this little scene: I had arbitrarily extended my "standing invitation" to Grant's Headquarter tent to Peter Reilly and the Korean theology student Isaac. Isaac told Peter that Lynchburg's Liberty University, where he is studying, is a _very_ evangelical university. Peter: "I mean no offense, but I want to ask a question: How old is the earth?" Isaac: "I take a biblical viewpoint on that." Peter: "So 6.000 years?" Isaac: "Yeah." Now if this little gem of a conversation is not absolutely worthy of General Grant's Headquarter tent in 1865 I don't know what is.

I was really impressed that some of the Virginia mud made it back to Massachusetts. 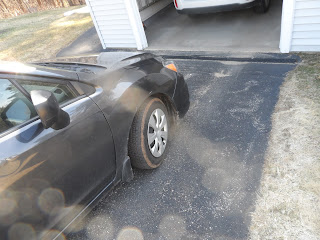 Peter J Reilly CPA hopes to be the first tax blogger to give up his day job.