Blessed Are The Peacemakers - Appomattox Sesquicentenniial

Yesterday, although not technically the sesquicentennial of the last day of the Civil War, is recognized as such in popular imagination and not without reason.  150 years ago April 9th was Palm Sunday.  The day started with the Army of Northern Virginia attempting to break out as it was surrounded by the convergence of the Army of the Potomac and the Army of the James.  At the end of the day, there would be no Army of Northern Virginia.  The Confederates States of America having lost the embodiment of its national spirit would not last much longer.

I didn't get quite as early a start as I had hoped.  As usual I was facing the blogger's dilemma of having to choose between writing about material I already had or getting new material to not write about.  Rather than finish the great hobby loss case I am working on for forbes.com, I wrote here about previous day's events which were capped by the Battle of Appomattox Station.

As planned yesterday, Alan Jacobs, my Appomattox battle buddy and the absolutely coolest kid I had known in my high school days, slept in.  I drove the 20 miles to the NPS site with Alan planning on taking one of the free shuttles that is running from Lynchburg for the next few days.

The short bus ride from the O'Brien Lot to the Courthouse brought up memories of another dangerous time in American history.  The fellow sitting next to me was wearing a hat indicating he was a US Navy veteran.  It turned out that he had been on the same ship as my brother during the same period of time, the early sixties when the USS Randolph patrolled the waters off Cuba intercepting Russian submarines and recovering Mercury astronauts. He was part of Helicopter Squadron 7 and my brother was part of the ship's company so they didn't know each other.  He did tell me a story of a midshipman wandering around the ship asking for something that didn't exist at the behest of the electronic technicians and it sounded like the kind of prank my brother would pull.

From the bus, it was a pretty simple matter to march to the sound of the guns.  People were along a long wooden fence next to the stagecoach road watching "the battle" in a field.  It was a not very complex affair with about fifty men on each side.  Infantry in the center of each line and cavalry on the wings. About that "men thing" - a couple of the Union Cavalry were girls who had not been left behind.  The troops were all white, an inaccuracy that would be discussed in a lecture at the end of the day. 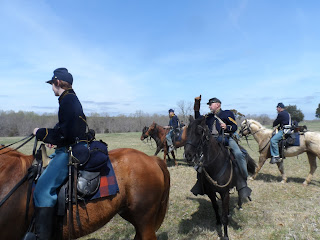 I walked along no mans land looking for a good spot and when I came to a jog in the fence it seemed as good as it could get.  Not so much for the view of "the battle", which was actually getting a bit tedious as for the people I ran into.  Byron Jones is the epitome of a "real timer".  At Gettysburg and Chancellorsville I kept telling my covivant about real timers whose ranks I suppose I joined on the eve of Antietam, when I chatted up some fellows who were reminiscing about Bull Run and deciding exactly where they should be the next day, Park Service events be damned.

Byron retired at the age of 62 specifically to be able to be at significant places exactly 150 years after the event. He logged 18,000 miles and was at 150 different battle sites.  (If I remember rightly there were about 10,000 engagements during the whole war.  I don't know how many I could name but it is a lot less than the number Byron showed up at.) 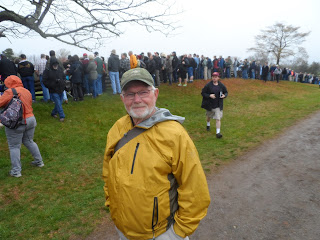 It kept getting better.  Fritzi Pisarski was watching her husband out on the field. They are with Company H of the 119th New York Volunteers.  She lives in Levittown on Long Island and has a passion for authenticity. It is OK to have canned goods in camp, as long as you remove the labels, but you best have a period can opener.  She told me that she met Mort Kunstler once and told him that he needed to do more paintings with women in them.  The result was Moonlight and Magnolias.

The women's history discussion drew in another lady with a Seneca Falls sweatshirt. Neither one of them had heard of Margaret Fuller.  Well they have now.

But then it got ridiculously better.  General Lee (Thomas Lee Jessee) was there in his baseball cap and windbreaker.  He filled me in a little more on his background.  He is northern  by birth and southern by the grace of God.  He taught astronomy and one time gave his students a "Skies of the Civil War" lesson setting the planetarium to show the stars as you might have seen them if you were laying wounded on the battlefield at Fredericksburg or something like that. 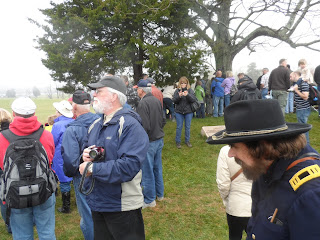 That's tough to top, but meeting John Griffiths dressed as one of Grant's staff officers might have done it.  John is a great great grandson of Ulysses Grant.  He was on the ground floor of reenacting starting in 1956 when there were no replica weapons available, but originals were still pretty affordable.

The arthritis makes it hard for him to do the manual of arms, so he is happy being a staff officer.  Reminds me of somebody I met at Gettysburg who switched to making believe he was a civil war doctor, which involves a lot less time in the sun. 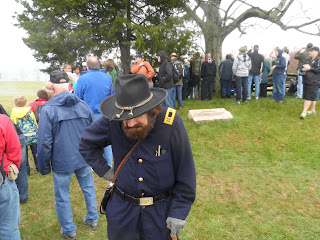 After they finally came over with the white flag I started heading over to the next event and ran into a chaplain reenactor.  Father Bruce Hennington is a retired priest from the Catholic Diocese of Madison WI. He had also served as a chaplain for the Coast Guard Reserve on the Great Lakes. 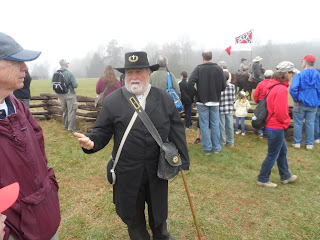 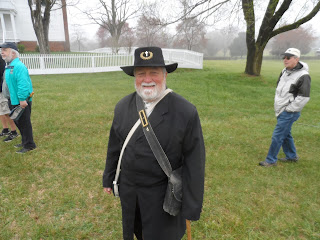 The main ceremony had a band and a lot of speeches by descendants, historians and politicians.  The 3rd Infantry Old Guard was there, as they had been at Antietam to present the colors, fire a 21 gun salute and play taps.  The speeches emphasized a few things.  It was really good for the rest of the world that the United States of America is, you know, United, because a balkanized America could probably not have rescued Europe from Fascism or faced down the Soviet Union.  The magnanimity of Grant's terms of surrender was a really good way to end a civil war, with the defeated general telling his boys to go home and try to be as good citizens as they had been soldiers (Confederate generals in other areas were a little less upbeat about their men, implying that they would have been better leaders if they had some decent followers.  One said that he hoped the boys would make better citizens than they had soldiers.)  And the end of slavery was a really big deal, which probably had not been adequately covered in the centennial.

It was a very moving ceremony actually with the crowd spontaneously singing the national anthem.  When the very modern major general spoke he mentioned that he had grown up in the area and was descended from a slave owner, but that now he worked in the Pentagon and his CIC was a black man and the crowd spontaneously applauded (or maybe they were all following my lead). 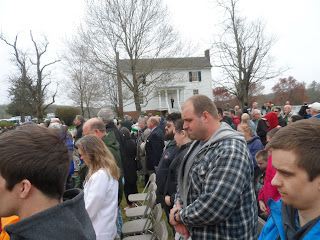 Alan and I finally connected after the ceremony.  It took us about five minutes talking on the cell phone to find one another.  As we headed over to the McClean house for the big event, we ran into Abraham Lincoln.  We talked a bit about his psychiatric diagnosis, which Alan and Abe had as depression, but I'm still thinking bipolar. 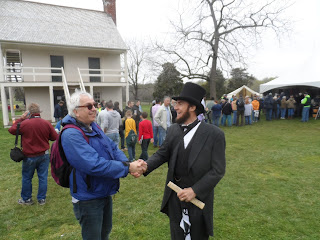 There were more speeches as we stood outside the house for an hour and a half.  Finally they came out around 3:00.  Lee riding away on his horse while Union soldiers lined the road and Grant and his staff officers removing their hats to show respect. 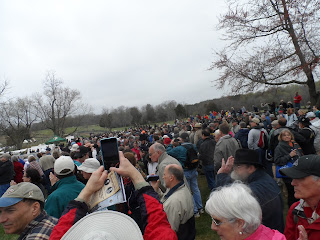 The bell ringing ceremony - one minute for every year of the war was supposed to be followed by bells ringing across the country.  Nobody I have talked to on the phone has heard them.  Love if you would comment if you did.

As noted above there were not that many black soldiers on the scene.  There were three guys floating around who are affiliated with Company H of  the 54th Mass which is based on DC.  Taking to them I got the impression that reenacting by African Americans mostly got started after the movie Glory.  The lecture I stayed on for after Alan bailed was about the USCT troops that were on the scene on the final day - 7 regiments - around 5,500 men.  A ranger had been doing research on their backgrounds and what happened to them.  In May when the Grand Review took place in Washington they were mostly down by the
Rio Grande. 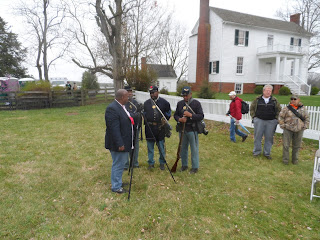 The large number of African Americans that served the Union was one of those inconvenient truths that complicated the Lost Cause narrative of a war that was about something really important, but since it was all settled we don't need to consider it anymore.

All in all, it was a great day.  I just dropped Alan at Amtrak and I'm thinking I'll catch up on some writing and explore Lynchburg a bit. At breakfast I met a retired British tank officer dressed as Union private. He told me that he had a bit part in Gettysburg and also in a Bridge Too Far

The big day is Sunday when the ANV infantry stacks arms and Joshua Chamberlain makes his grand gesture.

Peter J Reilly CPA, who hopes to become the first tax blogger to give up his day job, has established himself as something of a Sesquicentennial real timer, without being crazy about it.