Appomattox Gearing Up For Surrender

150 years ago yesterday, the prospects of the Army of Northern Virginia got even dimmer.  Its second to last battle was fought in the evening as cavalry under the command of George Armstrong Custer captured the train loaded with rations that had made it to Appomattox Station,  General Grant had responded to General Lee's inquiry about surrender terms.  Grant indicated that the officers and men would be "disqualified from taking up arms against the United States" and sent home.

Alan and I did not get quite the early start we had planned, but it was early enough. In the breakfast nook, a woman named Barbara chatted me up when she saw my T-Shirt. I was wearing the Prince of Wales flag shirt.  It tells the story of Colonel Corcoran's refusal to have the 69th New York State Militia parade to honor a "sovereign under whose reign Ireland was made a desert and her sons forced into exile".

Barbara was a teacher from Staten Island whose great great grandfather had been in the 61st New York.  She told me her brother was more the historian.  This may have been one of the sources of Alan's observation that we were descending into geezeerhood.


Things were pretty random at Appomattox Courthouse.  In a talk in the early afternoon, we heard explained some confusion about the name. If you go to Appomattox and find the court house, you have not found the place where the surrender took place. He told us that if you see the word courthouse it is part of the name of a town, whereas "court house" is the, you know, court house.

The NPS site is at the place where the village of Appomattox Courthouse was.  It had been important as one of the stops on the stagecoach road between Richmond and Lynchburg. The stagecoach road was the dirt track we were sitting next to as we were listening, with the actual road being a few hundred yards away. He told us that when he was growing up in Appomattox, there were really three places, the depot, "the court house" and the "surrender grounds", which is where we were.  What had happened was that when the railroad was built it was a couple of miles from the old "court house" which burned down and was replaced with a new "court house" closer to the train station and making the old stagecoach stop less of a go to spot. 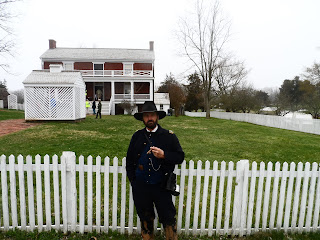 I ran into General Grant (Curt Fields) who was putting on a really good portrayal.  He said he had been selected by the Park Service three years ago to be the guy.  General Grant is not impersonated quite as much as Elvis, but there are a few.  As we were standing there General Lee (Thomas Jesse) came up wearing a baseball cap and a windbreaker.  He told Grant that he didn't think they were supposed to be in uniform today. 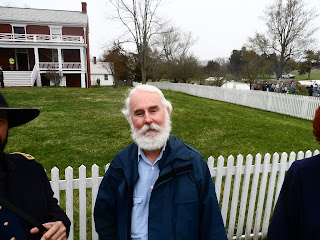 General Chamberlain, also in mufti, was setting up his own tent.  He was the same Chamberlain that I had met at the Gettysburg address, whose name, not coincidentally is Chamberlain. I had met others at Little Round Top and Chancellorsville.  The Chancellorsville guy really needed to work on his Maine accent. 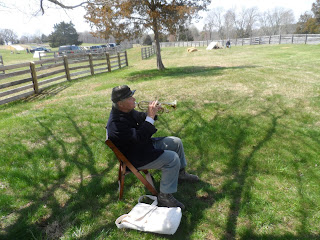 There were some Union cavalry riding around doing a demonstration.  Across the field a solo bugler started playing some of the classics in their honor such as the "Girl He Left Behind" One of the horse troopers was a girl who hadn't been left behind.  I love the 21st century. 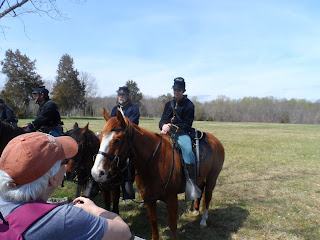 A TV reporter was standing alone while his cameraman was still working the tents.  He was feeling dejected because one of the "officers" had yelled at him for referring to his uniform as a costume.  Alan was kind of amazed to meet an on screen TV personality who was so self-deprecating.

We decided to head over to the Museum of the Confederacy.  I heard one of the senior staff there grumbling that MOC because of a merger that brought in a lot of money is not so much the Museum of the Confederacy anymore.  In my exploratory tour I had stopped at MOC and was amazed at the obvious neo-abolitionist influence.  Apparently before the merger they had more of a "Lost Cause" focus.

Confederates were camped next to the Parking lot, the cavalry and artillery that we would see in action a few hours later.  Some of those guys really identify with their units.  One of the artillery guys told me that his unit from SC did not surrender.  They buried the tubes in a graveyard and burned the wagon wheels and casissons and walked home.  He said his guys were going to burn some wagon wheels on Saturday.

We went to the Liberty Baptist church which was packed to hear a lecture from the Park historian who had identified exactly where the battle we were going to witness had been sited.  I kind of dozed off.

At the battle scene there were about a thousand spectators and a TV truck.  I talked to one of the organizers who is in charge of economic development.  I was wondering what type of boon this was to the town which has very little lodging.  He said that people were buying meals and gas.  A drugstore had a sign that reenactors "in costume" got a 10% discount. I wonder if that was offensive.

Watching the affair we once again learn that cannons are loud and reenactors are safety conscious, which is a good thing.

I've got to get going for the big day.  I'm driving over early and Alan will be sleeping in and taking the Lynchburg shuttle which will be running for the next three days.

The Army of Northern Virginia with its ration train captured, surrounded by superior forces will fight one more battle this morning before the two West Point graduates meet at the McClean House to start the process of ending the biggest intramural war ever.

Peter J Reilly CPA, who hopes to be the first tax blogger to give up his day job, fancies himself an amateur historian. He is the descendant of a Civil War veteran who served in the least distinguished regiment of the Army of The Potomac.